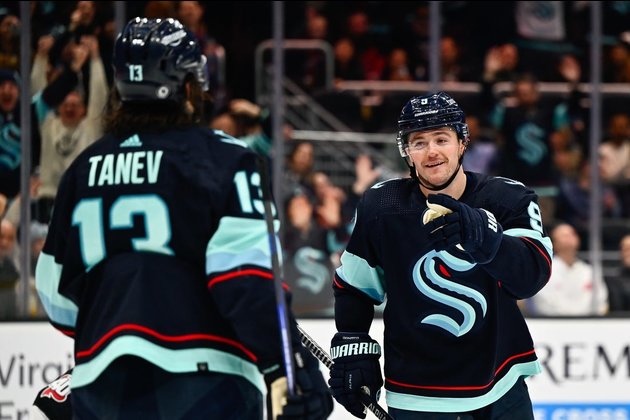 A little more than halfway into their second campaign, the Seattle Kraken have already equaled the victory total -- 27 -- from their expansion season.

The Pacific Division co-leaders will look to exceed that total when they play host to the defending Stanley Cup champion Colorado Avalanche on Saturday night.

"It tells me the work that the group in here has done. I mean, that's the bottom line, right?" said Kraken coach Dave Hakstol, whose team shares first place in the division with the Vegas Golden Knights. "That's what we're here for. You're here to compete for a playoff spot and positioning, and No. 1 on the list, continue competing every night for important points that go into the bank toward a playoff berth."

The Kraken earned win No. 27 on Thursday in their 45th game, defeating the New Jersey Devils 4-3 in overtime in the opener of a five-game homestand.

Ryan Donato had two goals and an assist and Andre Burakovsky scored the winner 1:10 into extra time. Defenseman Vince Dunn had the primary assist on Burakovsky's goal to extend his point streak to a career-high nine games (five goals, eight assists), the longest run in Kraken history.

Seattle goaltender Martin Jones, the NHL's reigning first star of the week, made 27 saves as the Kraken snapped a two-game skid after they won a franchise-record eight in a row.

"We got these last couple of games before the All-Star break, so ending on the right note is definitely huge," Donato said. "I mean, we're playing against good teams and every point matters. Now I think we've climbed to the top of the standings in our division with that game, but you know, there's going to be a lot of teams trying to knock us off the top, so I think winning those games is huge."

The Avalanche will be playing the second game of a back-to-back set after earning a 4-1 road victory over the Vancouver Canucks on Friday night. Colorado's Mikko Rantanen had a goal, his team-leading 32nd of the season, and an assist, and Nathan MacKinnon assisted on a pair of power-play goals.

The Avalanche have won four in a row, outscoring their opponents 21-5 in that stretch.

Valeri Nichushkin, Andrew Cogliano and Brad Hunt also scored at Vancouver, and Alexandar Georgiev made 28 saves for the Avalanche, who were 1-6-1 in the previous eight games before the winning streak.

"We're just playing our style," Cogliano said. "We're getting up the ice a lot quicker, guys are much more predictable, and it seems like we're defending less and playing more in their end.

"We got guys like Val and Mikko and Nate, and when they get zone time, they turn the tide of the game and they're tough to handle, and it just seems like our pace of our game is a lot higher."

Cale Makar, last season's Norris Trophy winner as the league's top defenseman, has missed the first two games of Colorado's three-game trip due to an upper-body injury. He is listed as day-to-day. Makar had a six-game point streak (four goals, five assists) before being injured.

The Saturday game will be the second meeting between the Kraken and Avalanche this season. Seattle won 3-2 in Denver on Oct. 21. The teams will conclude the season series on March 5 in Colorado.