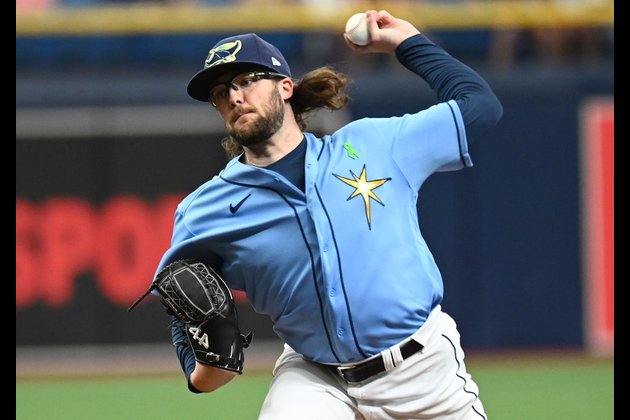 Ahead of making their fourth consecutive MLB postseason appearance, the Tampa Bay Rays will conclude the regular season - if weather permits - against the host Boston Red Sox on Wednesday afternoon.

Drew Rasmussen (11-7, 2.84 ERA) was originally scheduled to start for the Rays (86-75), but he wastaken off that assignment in order to ensure he's fully ready for the best-of-three American League Wild Card Series against Cleveland beginning Friday.

Shane McClanahan and Tyler Glasnow are lined up to start the first two playoff games, but the plan beyond that is undetermined. Rasmussen is a prime candidate to throw a potential deciding game.

"I don't think we've got anything finalized yet, but certainly know that Drew is going to be on our (playoff) roster and want to make sure that he is as fresh as possible," manager Kevin Cash said.

The Rays strive to avoid a fifth consecutive loss for the first time in 2022.

Fleming is slated to make just his third start and 10th appearance. He pitched eight innings over two relief outings against the Red Sox in July, giving up a combined seven earned runs.

The Rays have made several roster moves this week, calling up catcher Rene Pinto and pitcher Jimmy Yacabonis from Triple-A national champion Durham.

Pinto takes the spot of Francisco Mejia (paternity list), while Yacabonis follows Kevin Herget who was designated for assignment after throwing 4 1/3 innings on Monday.

Another recent addition from the minors, Vidal Brujan, could be an asset to the playoff roster.

"He's so versatile that he can help in many ways," Cash said. "Facing lefties, that'll be one. Pinch running. Late-game defensive replacement - second, outfield, he can play all over the place."

It is fitting that the consistent Nick Pivetta (10-12, 4.51) will pitch Boston's final game, looking to lead the way to the team's sixth consecutive home win.

Pivetta has made 30 or more starts for the third time in his career. Wednesday will mark his 33rd of the season, passing his high mark from 2018 with Philadelphia.

"This year has been up and down against (Toronto), but mostly negatives against the AL East all year round," Pivetta said. "But it doesn't change my approach, doesn't change my belief in myself. Go out there and compete the best I can every single time."

Most recently, he allowed four runs on six hits in his five-inning Friday start at Toronto.

Pivetta's last start against Tampa Bay was his best of three this year. He allowed just a pair of hits over five innings of two-hit ball on Sept. 7, but the Red Sox lost 1-0.

Boston looks to be finishing on a high note, allowing just two hits in the penultimate game and setting up the opportunity for a series sweep.

Xander Bogaerts broke a personal 0-for-12 grand slam with a monstrous grand slam as part of a five-run inning for the Red Sox.

"It's been a while. He had been searching and not swinging at the right pitches," manager Alex Cora said. "It was good to see him doing that."

Christian Arroyo has three RBI in the series after recording Tuesday's first.