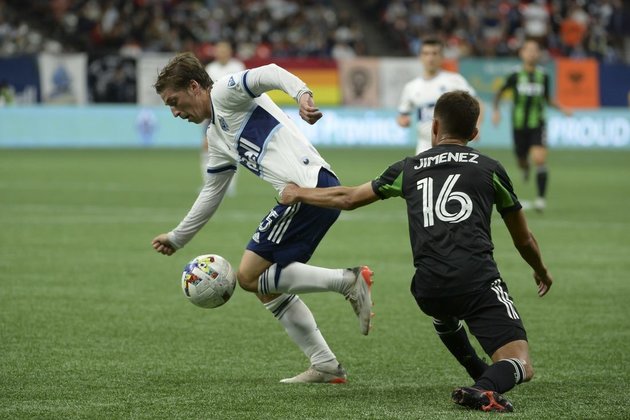 Ryan Gauld had a goal and an assist and Lucas Cavallini also scored as the Vancouver Whitecaps stayed in the hunt for a playoff spot with a 2-0 win over Austin FC on Saturday in a late-season Western Conference match.

Thomas Hasal stopped five shots to earn his fourth clean sheet of the season and the sixth of his four-year MLS career.

Vancouver (12-14-7, 43 points) won its third straight match, a season high, and moved from 10th to ninth place in the West. The Whitecaps are two points below the playoff line with one regular-season match remaining against Minnesota United FC, who sit in seventh place.

Austin (16-10-7, 55 points) is guaranteed a home playoff match in its first-ever trip to the postseason. Austin clinched the second seed in the West prior to the game when Colorado beat third-place FC Dallas. Los Angeles FC has already secured the top seed in the conference.

Austin has dropped four straight road games after losing just three times in its first 13 outings away from home this season.

The Whitecaps, facing a must-win scenario to stay alive for a playoff berth, scored just seven minutes into the game. Gauld took a long clearing pass from Pedro Vite and outsprinted the Austin defense down the right side before uncorking a left-footed shot that beat goalkeeper Brad Stuver low to the right corner.

Sebastian Driussi had Austin's best opportunity to tie the game late in the first half but his point-blank shot from deep in the box was blocked by Hasal.

Brian White had a chance add to the lead in the 50th minute before his shot, that got past Stuver, was cleared off the line by the Austin defense.

The Whitecaps doubled their lead in the 62nd minute as Cavallini ran to the near post to take advantage of a pass into the area from Gauld after another Vancouver breakaway.