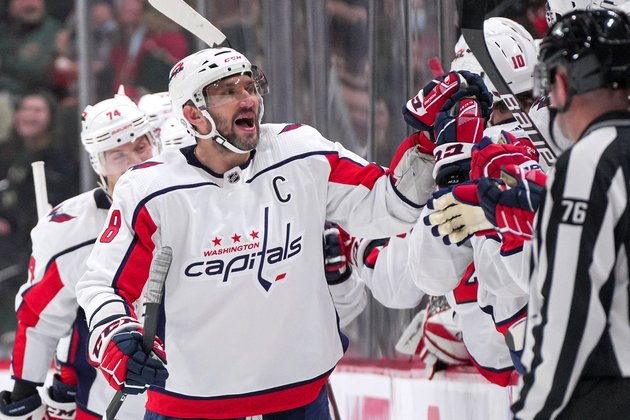 The NHL All-Star Game on Feb. 5 will be a celebration of the next generation after 18 of the 36 players named to represent their respective divisions by the league's hockey operations department were chosen for the showcase contest for the first time.

The midseason game at Las Vegas still will have its fair share of star power among the four captains selected by fan vote. Selected to head their squads were the Washington Capitals' Alex Ovechkin (Metropolitan Division), the Toronto Maple Leafs' Auston Matthews (Atlantic), the Colorado Avalanche's Nathan MacKinnon (Central) and the Edmonton Oilers' Connor McDavid (Pacific).

"Obviously, it's a privilege," Ovechkin said. "It doesn't matter if you are voted by the fans or the league selects you. It's a privilege. It's representing your team, yourself and, obviously, have fun with the best players out there on the ice. It's a pretty cool moment."

First-timers on the Atlantic squad: forwards Drake Batherson of the Ottawa Senators and Nick Suzuki of the Montreal Canadiens, defenseman Rasmus Dahlin of the Buffalo Sabres and goalie Jack Campbell of the Toronto Maple Leafs.

First-timers on the Central team: forwards Kyle Connor of the Winnipeg Jets, Alex DeBrincat of the Chicago Blackhawks, Kirill Kaprizov of the Minnesota Wild and Jordan Kyrou of the St. Louis Blues, along with defenseman Cale Makar of the Avalanche and goalies Juuse Saros of the Nashville Predators and Cam Talbot of the Wild.

First-timers on the Pacific roster: forwards Adrian Kempe of the Los Angeles Kings, Timo Meier of the San Jose Sharks and Mark Stone of the Golden Knights, along with goalie Thatcher Demko of the Vancouver Canucks.

One more roster spot for each of the four teams will be decided by fan vote through Monday.

The NHL is putting on its All-Star Weekend for the first time since 2019-20 season. Last season's event did not take place because of the condensed schedule due to the COVID-19 pandemic.

Not since the 1936 Olympics in Berlin has a government tried to prevent an athlete from competing in a sporting ...

TOKYO, Japan: Twin panda cubs have made their first public appearance before devoted fans at Ueno Zoo in Tokyo. However, ...

TEL AVIV, Israel: An avian influenza upsurge has claimed the lives of over 5,000 cranes in Israel, resulting in the ...

WARSAW, Poland: Poland has emerged as the most recent country in Europe to have reported 100,000 fatalities linked to COVID-19, ...

LOS ANGELES, California: Netflix has raised its monthly subscription price from $13.99 to $15.49 per month in the United States. ...

LONDON, England: The large British energy firm E.ON Next has delivered an apology after sending warm socks to 30,000 customers ...

ATLANTA, Georgia: With a business slowdown caused by a COVID-19 surge in December, Delta Air Lines lost $408 million in ...

Diamonds of the Night (Dmanty noci)