Rapper accused of romping in stands at NHL game 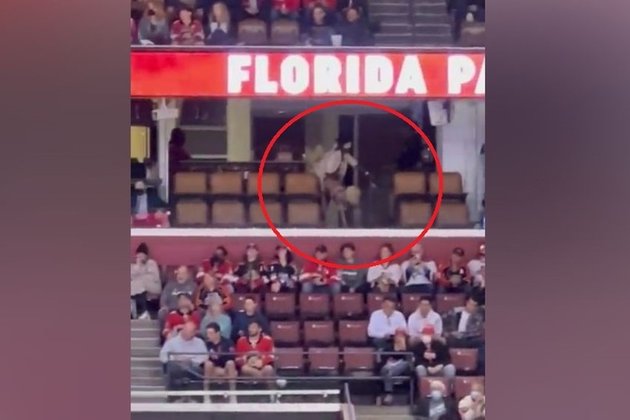 American rapper Kodak Black faced claims that he was filmed having sex at a recent NHL game, although some fans have ignited a debate as to whether or not the video is as incriminating as it appears to be.

The X-rated clip, which was recorded during the Tuesday showdown between the Florida Panthers and the Vancouver Canucks the FLA Live Arena in Sunrise, Florida, has certainly got some gums flapping amid (quite understandable, to be honest) claims that controversial rap artist and his female companion had their attention on something other than the ice.

The rapper, who is a noted fan of the Panthers, was seen making full use of the executive box he was watching the game from, with his unnamed partner was bent over and gyrating in front of him - but while some said that the 24-year-old was having intercourse, others weren't quite so sure.

Given that this is 2022, the offending clip instantly began traversing the Twittersphere but the original uploader, Twitter user @David954FLA, later explained that the situation wasn't quite as it may have seemed.

"I took the original video and I know they weren't having sex lol," he wrote.

A separate up-close video, which we will spare you from viewing but you can see here after the rapper proudly shared it on Instagram, also appeared to show that the only scoring going on inside the arena was on the ice.

The NFL, though, have moved to distance themselves from incident by deleting a social media message announcing the rapper's attendance at the game soon after the controversy broke.

"Was right there and saw it from lower bowl - was just twerking!!" exclaimed one eager fan.

"To everyone saying Kodak Black's later activities mean he's not actually a Panthers fan: He waited until it was 5-1. Some people do the wave during blowouts. Other people are more inventive," said another.

The official line that the pair were just 'dancing' inevitably led to some claims that this was a far from believable excuse.

"Um there's video and that was not twerking LOL" wrote one.

"Ain't no way, shawty looked like she didn't have pants on," said a second, while a third suggested that damage control was well underway.

"Appreciate the effort in protecting the brand but not a chance," they added.

Another comments, whose Twitter bio says that they are a veteran of the U.S. Navy, took another avenue and said that the video is just another example of the degradation of American society.

"As a society we have slipped so far down the rabbit hole, this hip hop rap generation disrespect of Women, elderly, idolizing gangs and criminals, you do the math and they are having children," he wrote.

"You can't fix the damage it has inflicted on the youth & society!"

Not since the 1936 Olympics in Berlin has a government tried to prevent an athlete from competing in a sporting ...

TOKYO, Japan: Twin panda cubs have made their first public appearance before devoted fans at Ueno Zoo in Tokyo. However, ...

TEL AVIV, Israel: An avian influenza upsurge has claimed the lives of over 5,000 cranes in Israel, resulting in the ...

WARSAW, Poland: Poland has emerged as the most recent country in Europe to have reported 100,000 fatalities linked to COVID-19, ...

LOS ANGELES, California: Netflix has raised its monthly subscription price from $13.99 to $15.49 per month in the United States. ...

LONDON, England: The large British energy firm E.ON Next has delivered an apology after sending warm socks to 30,000 customers ...

ATLANTA, Georgia: With a business slowdown caused by a COVID-19 surge in December, Delta Air Lines lost $408 million in ...