The Company completed two new IP lines north of the 2020 IP survey (Lines -07 and -08) totalling 7,800 metres (m) and extended the survey coverage west by 1,400 m. The new data identify continuation of the previously reported chargeability anomalies to the north and west. As a result, Idaho Champion has now mapped the St. Louis-Reliance Corridor IP anomaly over an area that is more than 3,000m north-south by 2,500m east-west (See Figure 1).

Idaho Champion's Chief Geologist Robert Kell commented: 'Our expanded IP program has better defined the footprint of this huge IP chargeability feature at the Champagne Project. The new data on the north and west improve our understanding of the geometry of the anomaly and the importance of the structural geology controls on the system. The IP anomalies continue to reflect strong magnitudes and continuity to depth, particularly on line 7 and the western end of line 6. The drilling so far has shown us evidence of intense veining and increasing alteration with depth. It will be important to integrate all the drill results with the new geophysical data to identify the best vectors to where this large system goes at depth.'

The completed IP lines outline a large chargeable volume covering nearly eight square kilometers, including a long axis of 2,400m parallel to the strike direction of the drill-indicated vein system. The IP chargeability can be shown in three dimensions to support the interpreted detachment of the Mine Hill mineralization from the underlying root zone to the north. The updated longitudinal section through the St. Louis - Reliance Corridor with a preliminary interpretation of metal zoning shows a central uplift approaching a kilometer in length (Figure 2). The fault geometry is complex and the Company's understanding of it is evolving, but there are at least three target areas warranting more work.

Most important is the root zone to the Mine Hill vein system and breccia bodies which appears to lie beneath a flat fault and weakly altered tuffaceous volcanic rocks. Drill holes DDH-CC-21-02 and 03 only tested the western edge of the target and DDH-CC-21-02 contained 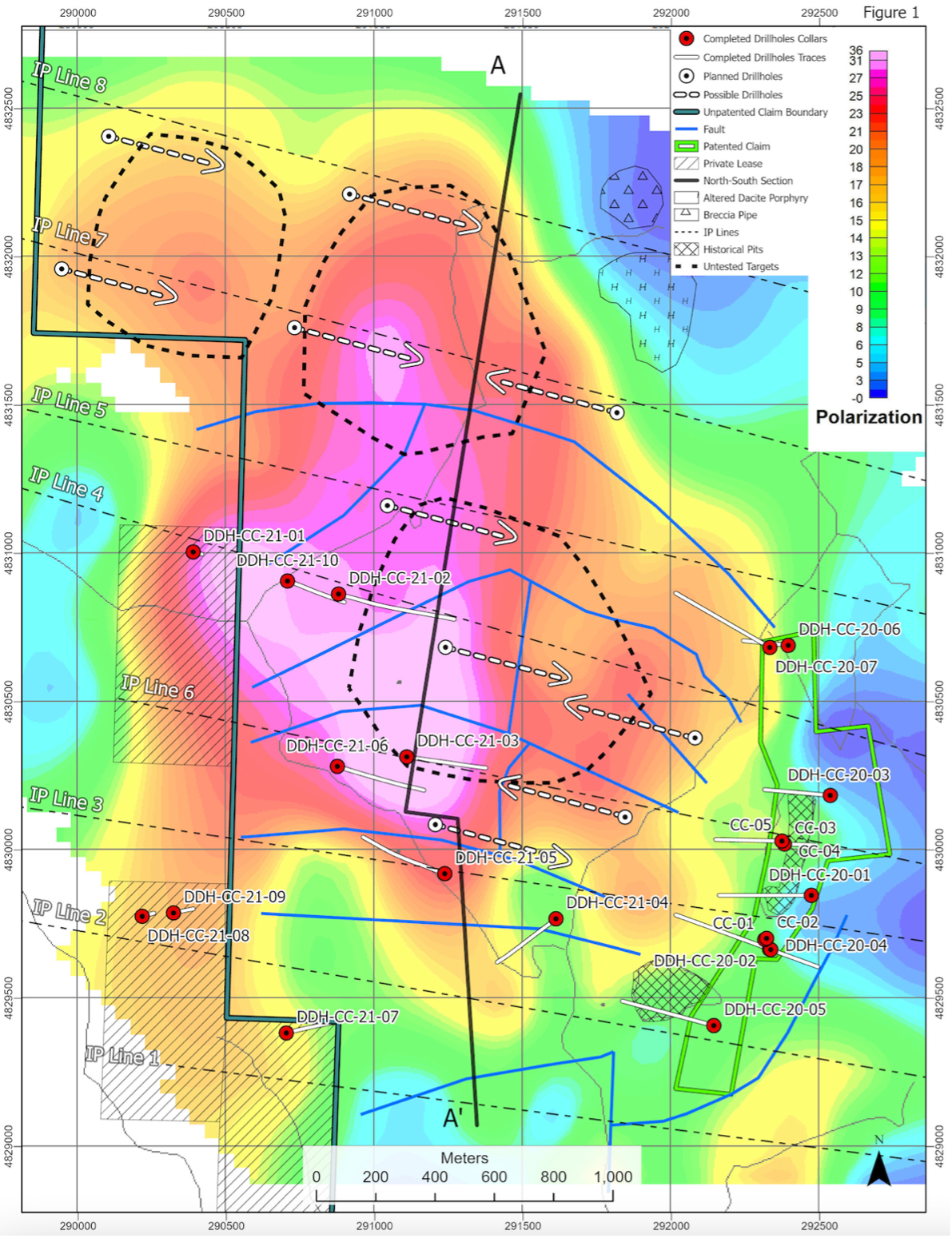 encouraging narrow high-grade veining (See Company news release dated November 4, 2021). The eastern end of this target appears to have a somewhat muted IP response, but this is interpreted to be related to a thick section of covering volcanics above the target zone. The best opportunities to test this feature are likely from the valley in the southeastern part of the anomaly. The second and third target areas outlined to the north-northwest appear to be the 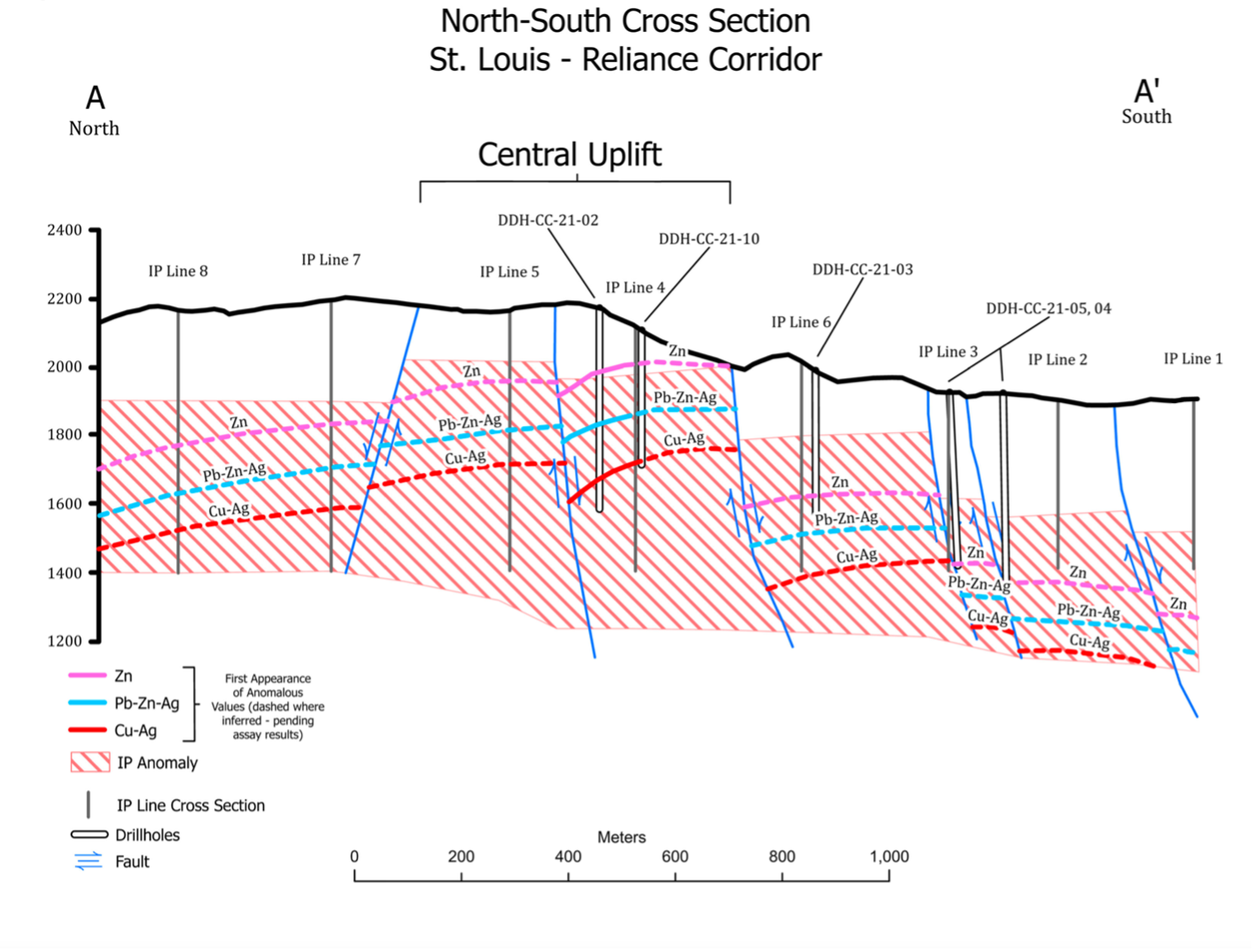 continuation of the Mine Hill root zone going north. The team continues to evaluate the geophysics, geochemistry, and structural geology of this corridor in three dimensions. These northern targets remain completely untested.

IP lines 7 and 8 were added to the northern part of the grid, at 500m spacings from IP line 5 (Figure 1). The lengthy survey lines and configuration enabled considerable depth of resolution. Three strong IP responses, reaching 25 to 30 milliseconds, occur on line 7 at approximately 200m depth. These features span between stations 400E to 50E, 100E to 500W, and 800W to 1400W (Figure 3).

The pattern of the two-lobed chargeability high continues onto IP line 8. While the magnitude of the response is more subdued (20 - 22 milliseconds), the feature occurs at a similar depth as on line 7 (200 - 300m). The pseudosection shows the response occurring between stations 0 to 500W, and 800W to 1200W (Figure 3). Idaho Champion's surface geologic mapping in this area revealed supergene leached, iron-stained and clay-altered volcanic tuff units. Farther east, several dacite porphyry intrusive plugs were found to intrude the tuff units that occur along line 8. Geologists also recognized a 100m diameter silicified breccia pipe cutting the tuff units in the vicinity of the porphyry plugs.

The occurrences of the dacite porphyry plugs and breccia pipe are expressed as a shallow 'floating' chargeability anomaly up to 30 milliseconds in magnitude between stations 400E and 1200E on line 8. The IP results indicate these features are rootless, which suggests that this block has been displaced eastward by as much as 1,000 meters along a flat-lying detachment fault. Reconstructing that fault displacement would shift these shallow IP anomalies back to a position capping the large IP anomaly to the west.

At approximately 850W on IP Line 8, Idaho Champion geologists collected several rock samples from outcrops of silicified fault-brecciated tuff. The samples yielded anomalous values of 0.343 g/t gold and 8.35 g/t silver, and 0.149g/t gold and 10.5 g/tsilver, respectively. These rock samples were also anomalous in lead (1,485 pm) and weakly anomalous in copper. The polymetallic anomalies in this area are interpreted to reflect late-stage, high-level leakage along fault structures from deeper seated mineralization.

IP line 6 was extended from last year's stopping point at 1200W to station 2600W(Figure 4). The line now documents an immense and strong chargeability response that spans more than two kilometers across, from approximately 1800W to 300E, and is open at depth. Based on a historic vertical core hole drilled by Phelps Dodge Corporation in 1980, the western part of the IP anomaly appears to be pyritized, carbonaceous, sedimentary 'basement' rocks of the Mississippian McGowan Creek Formation. 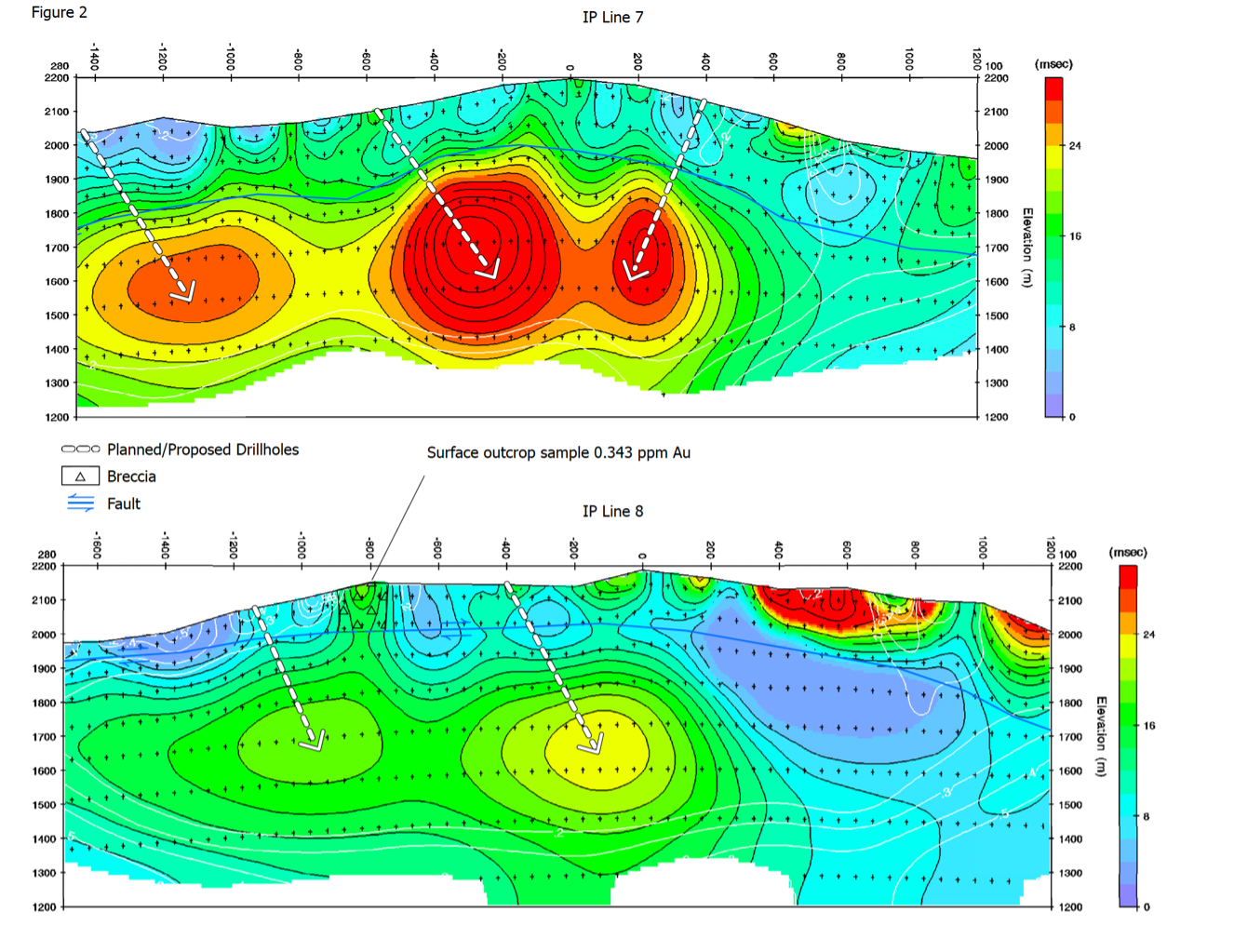 Based on preliminary results from the 2021 drilling, the eastern part of the anomaly was found to have been comprised of highly clay/sericite-silica-pyrite-altered Challis volcanic rocks and porphyritic latite dikes. Assays are still pending from drill holes DDH-CC-21-03 and 06, but the alteration and interpreted low-angle faulting is encouraging. The vein system and breccia bodies comprising the root zone to the displaced Mine Hill mineralization are interpreted to lie beneath a significant near flat-lying fault zone intersected in DDH-CC-21-06. The team will incorporate the completed assays into an updated interpretation of line 6 and its eastern targets. 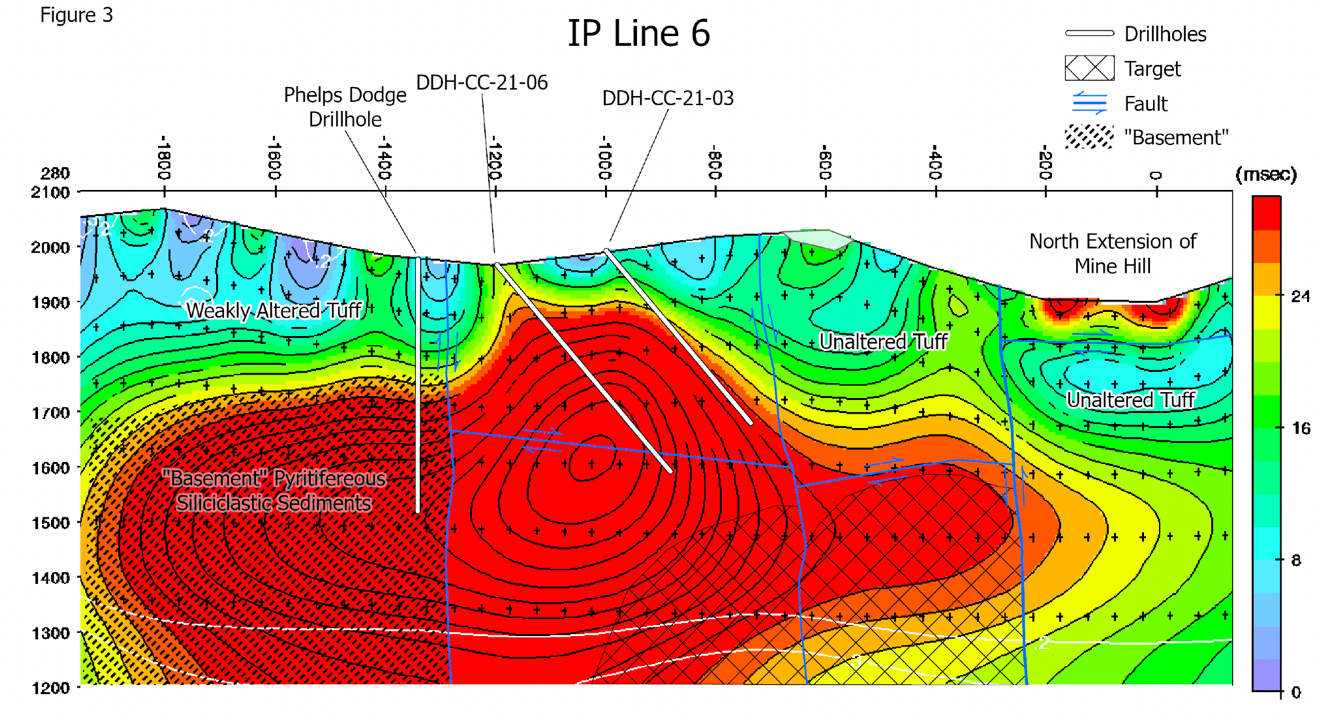 About the Champagne Project

The Champagne Mine was operated by Bema Gold as a heap leach operation on an epithermal gold-silver system that occurs in volcanic rocks. Bema Gold drilled 72 shallow reverse circulation holes on the project, which complement drilling and trenching from other previous operators. The property has had no deep drilling or significant modern exploration since the mine closure in early 1992.

The Champagne Deposit contains epigenetic style gold and silver mineralization that occurs in strongly altered Tertiary volcanic tuffs and flows of acid to intermediate composition. Champagne has a near-surface cap of gold-silver mineralization emplaced by deep-seated structures that acted as conduits for precious metal rich hydrothermal fluids. Higher grade zones in the Champagne Deposit appear to be related to such feeder zones.

The technical information in this press release has been reviewed and approved by Peter Karelse, P.Geo., a consultant to the Company, who is a Qualified Person as defined by NI 43-101. Mr. Karelse has more than 30 years of experience in exploration and development.

Idaho Champion is a discovery-focused gold exploration company that is committed to advancing its 100%-owned highly prospective mineral properties located in Idaho, United States. The Company's shares trade on the CSE under the trading symbol 'ITKO', on the OTCQB under the trading symbol 'GLDRF', and on the Frankfurt Stock Exchange under the symbol '1QB1'. Idaho Champion is vested in Idaho with the Baner Project in Idaho County, the Champagne Project located in Butte County near Arco, and four cobalt properties in Lemhi County in the Idaho Cobalt Belt. Idaho Champion strives to be a responsible environmental steward, stakeholder and a contributing citizen to the local communities where it operates. Idaho Champion takes its social license seriously, employing local community members and service providers at its operations whenever possible.

ON BEHALF OF THE BOARD

For further information, please visit the Company's SEDAR profile at www.sedar.com or the Company's corporate website at www.idahochamp.com.