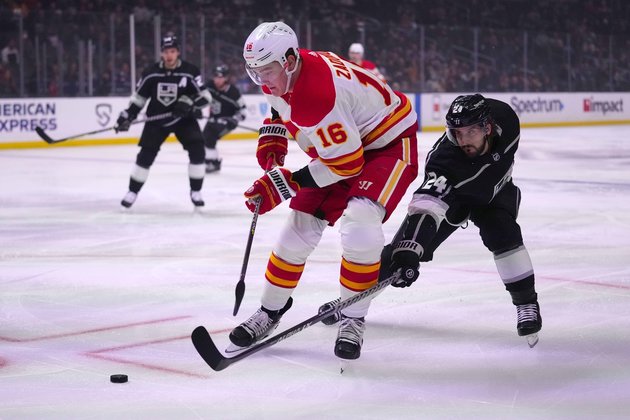 Andrew Mangiapane had a goal and assist to help the Calgary Flames open a four-game road trip with a 3-2 win over the Los Angeles Kings on Thursday night.

Milan Lucic and Matthew Tkachuk also scored while Jacob Markstrom made 40 saves for Calgary. The Flames have won six of seven, and they have prevailed in their past four road games.

Alexander Edler had a goal and an assist, Alex Iafallo also scored and Cal Petersen made 29 saves for the Kings, who finished 1-4-2 on their seven-game homestand.

Iafallo scored his third goal in the past two games when he tipped in a point shot from Edler for a 1-0 lead at 4:30 of the first period.

Around five minutes later, Los Angeles' Dustin Brown was called for hooking Johnny Gaudreau while trying to prevent a breakaway, and the Flames capitalized. Mangiapane scored on a one-timer off a feed from Mikael Backlund to tie it 1-1 at 11:19 of the first.

Calgary scored another power-play goal at 16:28 of the first period to move ahead 2-1. Lucic received a pass from Mangiapane and scored his seventh goal of the season from the bottom of the left circle.

Tkachuk made it 3-1 at 4:54 of the second. He scored his 11th of the season on a wrist shot from the right circle following a turnover by the Kings in the neutral zone.

Edler received a pass while trailing a rush into the Calgary zone and scored the 100th goal of his NHL career on a wrist shot from the left circle to cut the lead to 3-2 at 18:11 of the second period.