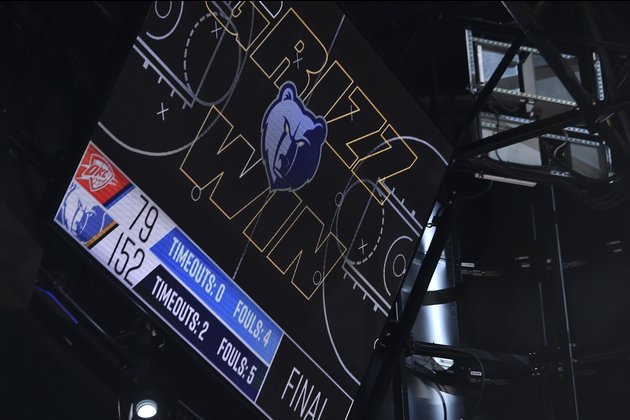 Jaren Jackson Jr. scored 27 points to lead the Memphis Grizzlies to a franchise record for points and the biggest winning margin in NBA history, 152-79 over the visiting Oklahoma City Thunder on Thursday.

The previous NBA record for largest margin of victory was 68, by the Cleveland Cavaliers over the Miami Heat on Dec. 17, 1991. Memphis' previous record for points was 144, set in January 2007 against the Golden State Warriors.

The Grizzlies, who had nine players score in double figures, stretched their winning streak to three. They managed the record blowout despite the absence of their leading scorer, Ja Morant, who is sidelined due to a knee injury.

The Thunder have lost eight in a row and 10 of their past 11. Luguentz Dort scored a team-high 15 points for Oklahoma City, which was without leading scorer Shai Gilgeous-Alexander (concussion protocol).

Cameron Johnson and Cameron Payne had 19 points and six rebounds apiece and host Phoenix set a franchise record with its 18th consecutive victory by defeating Detroit.

Mikal Bridges supplied 18 points for the Suns, while Deandre Ayton contributed 17 points and 12 rebounds and Chris Paul added 12 points and 12 assists. The Suns didn't have top scorer Devin Booker, who injured his hamstring during the team's record-tying victory over Golden State on Tuesday.

Fred VanVleet scored 26 of his 29 points in the second half and Toronto ended visiting Milwaukee's eight-game winning streak.

The Bucks were without Giannis Antetokounmpo (sore calf). DeMarcus Cousins (rest) also did not play after making his Bucks debut on Wednesday. Jrue Holiday led Milwaukee with 26 points, and Khris Middleton added 22.

Pascal Siakam added 20 points before fouling out in the fourth quarter for the Raptors, who ended a five-game home losing streak. Toronto was without OG Anunoby (hip pointer) and Khem Birch (knee).

DeMar DeRozan scored 34 points and Nikola Vucevic and Zach LaVine each added 27 to lift visiting Chicago to a victory over New York.

DeRozan made 12 of 19 shots from the floor and 10 of 11 from the free-throw line. Vucevic followed up a season-high 30-point performance in Chicago's 133-119 win over the Charlotte Hornets on Monday by making 5 of 9 shots from 3-point range against New York.

Julius Randle collected 30 points and 12 rebounds, and Alec Burks and Evan Fournier each added 16 for the Knicks, who have lost two in a row and 10 of their past 16 games.

Bryn Forbes led all scorers with 18 points as visiting San Antonio took charge early and cruised to past Portland to capture its season-high third straight victory.

The Spurs never trailed, amassing a double-digit lead in the first quarter that they built to as much as 27 early in the third period. Doug McDermott returned from missing four games with a knee injury to score 16 points, and Dejounte Murray tallied 15 points and distributed 13 assists.

CJ McCollum and Norman Powell scored 16 points each to lead the Trail Blazers. Portland was without Damian Lillard (abdomen) and Nassir Little (ankle).