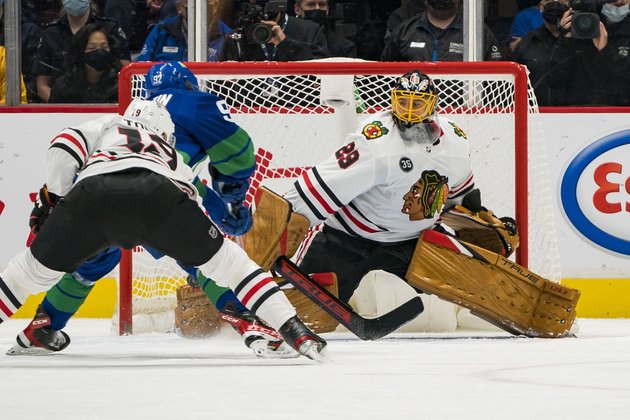 Marc-Andre Fleury made 40 saves for his first shutout of the season to lead the visiting Chicago Blackhawks to a 1-0 victory over the Vancouver Canucks on Sunday night.

Brandon Hagel scored the game-winning goal for Chicago, which won for the fifth time in six games under interim head coach Derek King.

Fleury broke a tie with Roy Worters for 14th place in NHL history with the 68th shutout of his career while improving to 13-0-2 in his last 15 starts against Vancouver. It was also his fourth consecutive win this season and the 497th of his career, which ranks third all-time in NHL history.

Thatcher Demko made 23 saves for Vancouver.

The game was scoreless through two periods despite the fact that Vancouver dominated the action, outshooting Chicago, 30-13, including four high-danger chances. But Fleury, with the help of the goal posts, was up to the task.

Three times in the second period, the Canucks rang shots off the iron. Brock Boeser did it the first time early in the period with a wrist shot from the bottom of the right circle off the far post. Oliver Ekman-Larsson and Elias Pettersson also both hit metal on shots over a 25-second span midway through the period.

Hagel then put the Blackhawks ahead at the 4:12 mark of the third period with his fifth goal of the season, redirecting Erik Gustafsson's wrist shot from the left point with the shaft of his stick while jostling with 6-foot-8 Tyler Myers in front of the crease.

Vancouver nearly tied it midway through the period but Tanner Pearson's shot from the right circle caromed off the crossbar.

The Canucks had a six-on-four advantage with 1:30 to go after Jake McCabe was penalized for interference and Demko was pulled for another extra attacker, but Fleury came up with four big saves, including two on slap shots by Pettersson.

Does Pentagon need three-quarters-of-a-trillion-dollars every year?

Despite a disagreement over some amendments in the Senate, the United States Congress is poised to pass a $778 billion ...

BERLIN, Germany: In a bid to halt the spread of the fourth wave of COVID-19 in Germany, national and regional ...

NEW YORK CITY, New York: A former Netflix software engineer and his friend will serve time in prison after being ...

VIENNA, Austria: A surgeon who amputated the wrong leg of an 82-year-old patient in May, later describing the mistake as ...

MUNICH, Germany: German authorities announced this week that a World War II bomb exploded at a construction site next to ...

LONDON, England: The United States, United Kingdom, European Union, and Canada have agreed to tackle the ongoing migrant crisis on ...

U.S. stocks roar back as concerns over Covid variant diminish

Grab app valued at $40 billion in debut on Nasdaq

SINGAPORE: Singapore-based Grab, the major ride sharing app used in South East Asia, has made its stock market debut on ...

After decades of delays, Shell Oil gives up on UK's Cambo oilfield

LONDON, England: Shell Oil announced this week that it has abandoned its plans to develop the Cambo oil field west ...

SYDNEY, NSW, Australia - Stocks in Asia closed modestly lower Monday as markets appeared to be coming to grips with ...

US saw only 210,000 hired in November, falls short of expectations

WASHINGTON D.C.: In a reversal of the predictions of expected job growth issued by economists, U.S. employers hired only 210,000 ...

CHESAPEAKE, Virginia: Discount retail chain Dollar Tree said it will raise its prices from $1 to $1.25 for most of ...

The Man Who Fell to Earth

Man Who Fell to Earth