COVID-19 knocks FC Dallas out of MLS is Back tourney 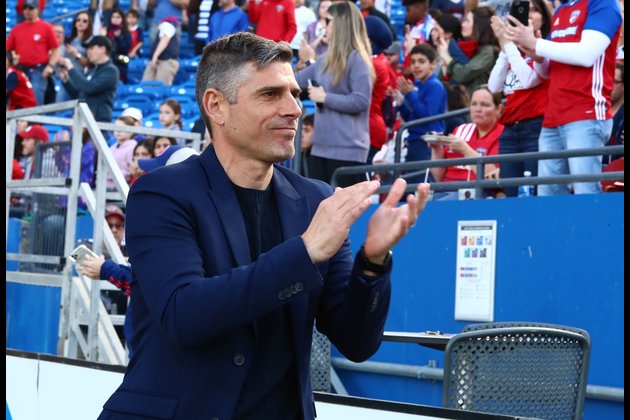 FC Dallas is no longer part of the MLS is Back tournament that begins later this week in Florida, the league announced Monday.

The MLS said that FC Dallas has had 11 positive COVID-19 test results -- 10 from players and one from a member of the technical staff. Each positive test occurred after the club arrived in the Orlando area on June 27.

The MLS said the decision to remove FC Dallas from the tournament was reached in consultation with national health authorities and infectious disease experts.

"Given the impact of the number of positive tests on the club's ability to train and play competitive matches, we have made the decision to withdraw FC Dallas from the MLS is Back Tournament," MLS Commissioner Don Garber said in a statement. "The health of everyone involved in our return to play has always been our top priority, and we will continue to make decisions consistent with that priority."

"As we continue to focus on the well-being of our players, coaches and staff who are in isolation in Orlando, we understand it is not in their best interests to compete at this time," Gonzalez said in a team statement. "While we're disappointed, the health and safety of our traveling delegation as well as our league partners is our highest priority."

The MLS and FC Dallas are now working on a plan with health officials to allow the team to depart Florida and return to the team's base in Frisco, Texas.

"We absolutely agree with the league's decision to withdraw FC Dallas from the MLS is Back Tournament out of safety concerns for our players and staff," FC Dallas president Dan Hunt said in a statement. "We're looking forward to resuming the 2020 season once the entire club is healthy and in position to play competitive matches at the highest level."

FC Dallas was initially scheduled to play the Vancouver Whitecaps on Thursday before that match was postponed earlier this month.

The high number of cases has prevented FC Dallas from training. The club is reportedly under quarantine.

The MLS is Back is tournament begins Wednesday at the ESPN Wide World of Sports Complex near Orlando.

On Sunday, Gonzalez told ESPN, "The priority is getting guys healthy, feeling safe, so that we can be strong in the long term, which I know we're going to accomplish."

According to the MLS, 13 total MLS players have tested positive for the coronavirus.

Isreeli empathy for Lebanon draws fire from within

BEIRUT, Lebanon - The Lebanese cabinet has ordered port officials who had roles in storing or guarding highly explosive materials ...

WASHINGTON, DC - The Trump administration said on Wednesday it was stepping up efforts to purge "untrusted" Chinese apps from ...

More than 100 villagers fled their homes in Myanmar's northern Shan state into China as fighting broke out between ethnic ...

BEIRUT, Lebanon - The world has been shocked by the severity of a huge blast which has rocked Beirut, killing ...

No precedent for Trump to take cut of TikTok deal

NEW YORK, New York - President Donald Trump's demand that the U.S. government get a cut from a potential Microsoft ...

DUBLIN, Ireland - While its future on the other side of the Atlantic, and in the Pacific, is up in ...

SEARCA to get behind regional coconut industry

WASHINGTON, DC - President Donald Trump interrupted his press briefing on the coronavirus on Tuesday night to enthuse over the ...