Latest test for surging Kings will come from Raptors 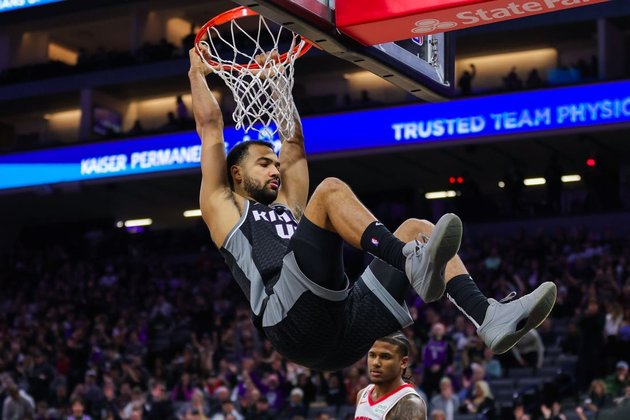 The Sacramento Kings boast a pair of All-Star candidates in De'Aaron Fox and Domantas Sabonis, but reserve forward Trey Lyles might hold the key to their future success.

The surging Kings have won seven of eight heading into Wednesday's matchup against the visiting Toronto Raptors. Following a breakout game against the Memphis Grizzlies, Lyles will likely figure prominently in the Raptors' scouting report.

The eight-year pro was 6 of 8 from 3-point range and finished with a season-high 24 points in the Kings' 133-100 victory over Memphis on Monday.

Sacramento's reserve lineups have struggled at times on the defensive end, but Lyles has made a positive impact since moving into the rotation last month. He had six rebounds and a season-high three blocked shots against the Grizzlies.

Sacramento will need that intensity against Toronto, which is beginning a season-high seven-game trip against Western Conference opponents.

The Raptors had two days off after splitting back-to-back games against the Boston Celtics and New York Knicks over the weekend.

Fred VanVleet scored 28 points and Gary Trent Jr. had 24 to help Toronto snap a three-game losing streak with a 125-116 win over the Knicks on Sunday.

VanVleet returned after sitting out one game because of soreness in his right ribs. Toronto played without forward O.G. Anunoby (sore right ankle), who is listed as day-to-day.

Trent is averaging 22.3 points and shooting 40.8 percent from 3-point range over his last 15 games for the Raptors, who are 6-15 on the road this season.

Coach Nick Nurse is hoping to see improvement across the board during his team's lengthy road trip.

"The defense has fallen back. We've been talking about that around here quite a bit," Nurse said. "There's a lot of areas that need shoring up. The list is long. We're getting through it. But we expect to get through it. There's a lot of basketball to be played yet. The guys in that room can play it."

Toronto is looking to avenge a 124-123 loss to Sacramento on Dec. 14, when Fox finished with 27 points and 10 assists. The Kings attempted 46 3-pointers in the win, and the team has continued to rely on its perimeter game throughout the season.

Guard Kevin Huerter has made an immediate impact in his first season with Sacramento, averaging 15.5 points per game while shooting 41.4 percent from beyond the arc.

After winning just 30 games last year, the Kings are in third place in the Western Conference and appear primed to make their first playoff appearance since 2006.

"We're having some fun," Brown said. "But we've got a lot of season left."