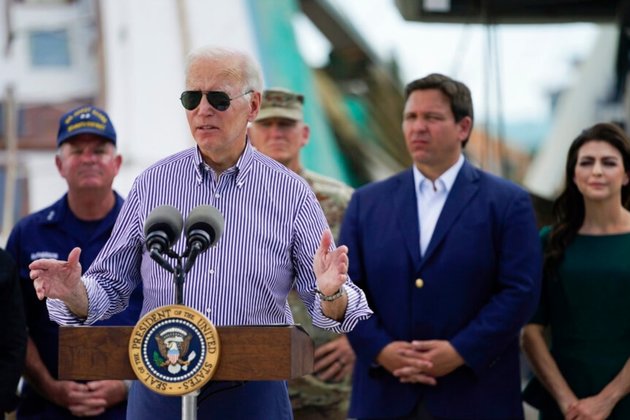 The U.S. death toll from Ian has risen to at least 109 people, with 105 of those deaths in Florida and the rest in North Carolina. More than 50 deaths were reported in Florida's Lee County, which bore the brunt of the storm when it came ashore.

Biden met with state and local leaders, including Republican Governor Ron DeSantis and Senators Marco Rubio and Rick Scott, to discuss recovery efforts. The president has quarreled with DeSantis, a potential 2024 presidential election contender, on immigration and other issues, and Rubio and Scott have both sharply criticized the Biden administration's policies.

For now, the political rivals have put differences aside to focus on relief efforts in the aftermath of the hurricane that struck the country's third most populous state.

'This is about America coming together,' Biden said in a joint press conference with DeSantis after being briefed by officials. He vowed to bring 'every element of the federal government together to help with immediate needs and long-term rebuilding' in the state.

Combination handout images released Oct. 4 , 2022, by the Pleiades Neo show an image of Fort Myers Beach, before and after Hurricane Ian made landfall.

Floridians without disaster insurance may be eligible for up to $80,000 in federal funds to repair or replace their homes and vehicles, Biden said. 'I want the people of Florida to know you have my commitment and America's commitment that we're not going to leave. We're going to see you through this entire process.'

DeSantis thanked the president for visiting his state and praised the Federal Emergency Management Agency. 'We were very fortunate to have good coordination with the White House and with FEMA,' he said.

Last month, DeSantis sent dozens of migrants to Martha's Vineyard, an upscale island enclave in the liberal-leaning state of Massachusetts, to protest record-setting arrivals at America's southern border. DeSantis would not confirm reports of his alleged plan to send migrants to Biden's home state of Delaware.

Biden dismissed any notion of political differences and said that DeSantis had 'done a good job' on the recovery effort.

'I called him - I think even before he called me - when I heard this storm was on its way,' he told reporters traveling with him to Florida. 'We worked hand in glove. We have very different political philosophies, and - but we worked hand in glove. ... On things related to dealing with this crisis, we've been completely lockstep. There's been no difference.'

Observers said both Biden and DeSantis were interested in being seen as overcoming their partisan divide as they deal with the impact of the natural disaster.

'Voters really respond to a president taking action, or a governor taking action, in a way that overwhelms the penalty from sort of the seemingly random acts of God that caused the damage in the first place,' Andrew Reeves, a professor of political science at Washington University in St. Louis, told VOA.

Federal emergency aid has been made available to the state for at least 60 days beginning September 23, in accordance with DeSantis' request.

'The administration has approved now 60 days of 100% reimbursement for debris removal,' DeSantis said, adding that in some communities, 'their bill for debris removal will likely be more than their annual budgets.'

'This is really, really significant help,' the governor said.

Federal aid is normally given for 30 days; however, the impact of Ian is 'catastrophic,' FEMA Administrator Deanne Bennett Criswell told reporters traveling with Biden on board Air Force One. 'Sixty days just seem reasonable.'

Ian's impact is expected to be long-lasting and to cost the federal government billions of dollars.

Andre McCourt, right, and his wife, Sandra, carry waterlogged furniture out of his house, Oct. 4, 2022, in North Port, Fla.

'We are still very much in the lifesaving and stabilization mode. They are just beginning the assessments of what the actual extent of damage is to the infrastructure,' Criswell said. 'It's going to be in the billions. How many billions, I don't know yet, but it will certainly be in the billions and perhaps one of the more costly disasters that we've seen in many years.'

This is the second time Biden has traveled to survey storm damage this week. He visited Puerto Rico on Monday for an update on the island's efforts to recover from Hurricane Fiona.

Ian made landfall in Florida on September 28 as a dangerous Category 4 storm with maximum sustained winds of 240 kilometers an hour, and it left more than 2 million customers across the state without power. Officials with utility companies said it would likely be Friday or Saturday before electricity was restored to at least 95% of their customers.

More than 1,500 people have been rescued as crews engage in a painstaking, door-to-door search for victims among destroyed homes and buildings.

Anita Powell contributed to this report. Some information came from The Associated Press and Reuters.