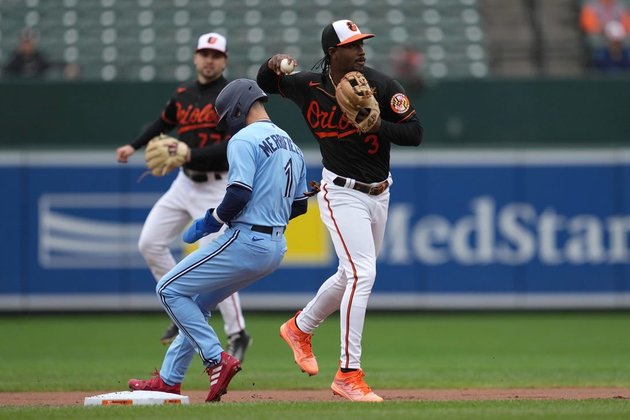 Terrin Vavra's first career home run was a three-run blast as the Baltimore Orioles rallied from a four-run deficit to beat the visiting Toronto Blue Jays 5-4 on Wednesday afternoon in the first game of a doubleheader.

Vavra's game-winning homer came with two outs in the bottom of the eighth inning.

The Blue Jays, who are preparing for the postseason, used five pitchers across the first five innings without allowing a run.

The teams will meet for the regular-season finale later Wednesday. It will be the end of the season for the Orioles (83-78), while the Blue Jays (91-70) will head home afterward to open the American League playoffs as the top seed among wild card teams.

DL Hall (1-1) earned the victory with one shutout inning in relief. Bryan Baker notched his first career save by pitching the ninth, with two strikeouts.

Otto Lopez's single in the second inning accounted for the game's first run. Lopez went 3-for-3, while teammates Vladimir Guerrero Jr., Jackie Bradley Jr. and Moreno all had two hits for the Jays.

Mitch White (1-7), who had been slated to be Tuesday night's starter, was the fifth Toronto pitcher used. He worked the final four innings, allowing five runs on seven hits as the Blue Jays had a four-game winning streak snapped.

The Orioles won for just the third time in their last eight games.

Ryan Mountcastle went 3-for-4 for Baltimore, while Vavra and Gunnar Henderson both had two hits.

The game featured 23 hits, with 13 of those by the Blue Jays.

The doubleheader was necessitated because Tuesday night's scheduled game was rained out.