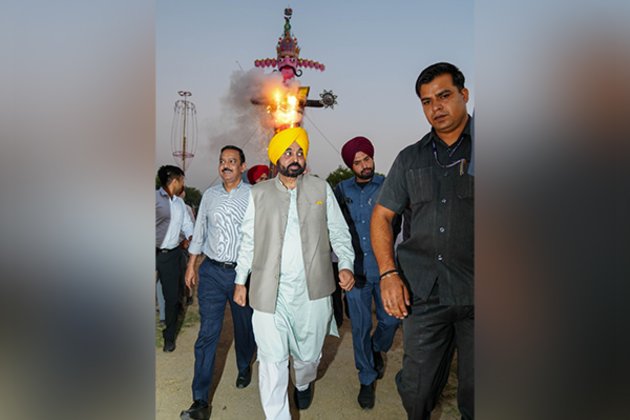 SAS Nagar (Punjab) [India], October 5 (ANI): On the sacred festival of Dussehra, the Punjab Chief Minister Bhagwant Mann on Wednesday gave a clarion call to people to eradicate the social maladies in the state for restoring its pristine glory, read a statement from Chief Minister's Office (CMO).

The Dussehra festivities were held at Phase 8 by the Dussehra Committee Mohali (Regd).

Addressing the gathering here, the Chief Minister greeted the country's people, especially the Punjabi living across the globe on the sacred occasion of Durga Puja and Dussehra (Vijaydashmi). He said that these two festivals, which symbolize the victory of good over evil, remind Indians of their rich cultural heritage.

Bhagwant Mann said, "Our nation has an age-old tradition of celebrating both these festivals which play a vanguard role in promoting goodwill, peace and communal harmony in the society besides showing us the way of ideal living to carve out an egalitarian and harmonious society."The Chief Minister appealed to the people to collectively celebrate this joyous occasion by rededicating themselves for the promotion of peace, amity and brotherhood in the state.

He said, "All of us must rejoice this festival with full religious fervour and gaiety by rising above the parochial considerations of caste, creed and colour."Bhagwant Mann said that these festivals give people a message of togetherness and brotherhood adding that on this day, they should vow to make the state frontrunner in the country by getting rid of all the social maladies.

Congratulating people on the occasion, the Chief Minister said, "Punjabis were especially filled with pride over Dussehra, as the epic of Ramayana was written in Punjab, on the land of holy city Amritsar. He said that the festivities of Dussehra inspire us to remain grounded, keep our anger under control and stay away from hate. Bhagwant Mann said that these three factors became the reasons for the decline of even the most intelligent person adding that the festivities also teach us to remain with brotherhood."The Chief Minister further said that these festivals are not only sources of inspiration, but also help people to perpetuate the rich cultural heritage to their coming generations. He said that the true essence of Dusshera lies in fighting against injustice, evil and egoism with love, brotherhood and communal harmony. Bhagwant Mann called upon the people of Punjab to imbibe the teachings of these festivals in their daily lives to take Punjab to unprecedented heights.

Meanwhile, the Chief Minister also announced to use the Dussehra Ground at Mohali solely for the purpose of the Dussehra celebration. He said that no commercial activity will be allowed on this ground.

Bhagwant Mann further said that the notification in this regard will be issued very soon. (ANI)