Ballpark record in sight for Guardians' Cal Quantrill vs. Royals 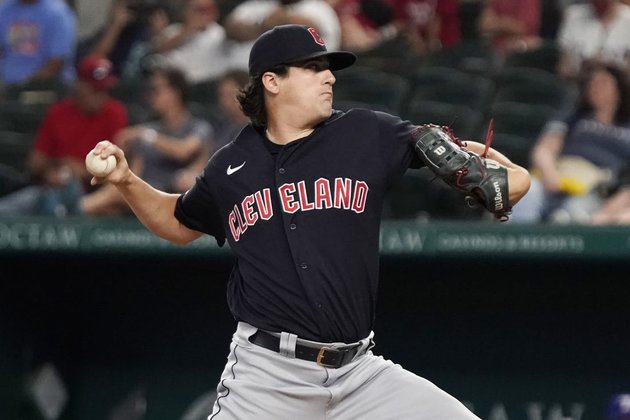 The right-hander puts his perfect record on the line again when the Guardians face the visiting Kansas City Royals in the fifth game of a six-gameseries on Tuesday.

Kansas City (65-95) evened the series at two wins apiece after Drew Waters hit a three-run homer in the 10th inning to give the Royals a 5-2 victory on Monday.

The Guardians (90-70), who clinched the American League Central early last week, lost for just the sixth time in their last 28 games.

Quantrill is one win shy of matching Vic Raschi's perfect record in one ballpark. Raschi went 14-0 at Comiskey Park from 1947-55.

"I don't know the exact numbers, but I do like pitching at home," Quantrill said. "I guess I don't want to jinx anything."

Quantrill received a no-decision after giving up one run over six frames against the Tampa Bay Rays last Thursday.

The 27-year-old Canadian has won a career-best 10 consecutive decisions and has not lost in 16 starts dating to July 5. He is 5-0 with a 3.09 ERA in eight career appearances (five starts) against the Royals.

Left-hander Daniel Lynch (4-12, 4.96) will take the mound for Kansas City in search of his first victory since Aug. 1.

Lynch, 25, turned in a quality start against the Detroit Tigers last Wednesday, allowing two runs across six innings in a 2-1 loss.

"I thought his changeup really stood out -- he was able to use it in big situations -- but his slider was good and he had a good fastball," Royals manager Mike Matheny said.

Austin Hedges is 3-for-6 with a home run against Lynch, who is 0-2 with a 8.66 ERA in four career starts versus Cleveland.

Kansas City catcher Salvador Perez has missed the past two games due to soreness in his left thumb and is listed as day-to-day.

The Royals have been powered during the current series by Waters, who is 6-for-15 with three home runs and seven RBIs in his last four games.

Shortstop Bobby Witt Jr. recorded a key stolen base in the sixth inning on Monday, becoming the first rookie with 20 home runs and 30 steals since Mike Trout in 2012.

The final series of the regular season features a pair of star rookies in Witt and Cleveland left fielder Steven Kwan.

Kwan, 25, was named AL Rookie of the Month after batting .325 in September, with three home runs and 14 RBIs.

He is batting .301 with six home runs, 52 RBIs and 19 stolen bases while playing stellar defense in left field.

"To have that level of consistency at the big-league level in your first year," Guardians pitcher Triston McKenzie said, "I don't know if I could brag more about it. One of the wristbands I used to try to steal from him, it says, 'Stay consistent.' That's him, every day."