Arthur Smith, Falcons turn to rookie runners with Patterson out 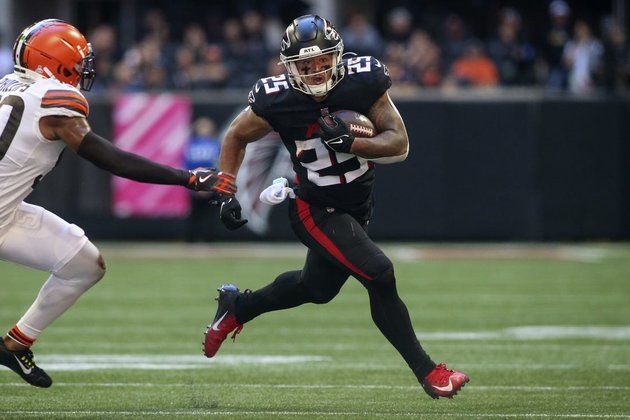 First place in the NFC South will be on the line when the Atlanta Falcons (2-2) visit the Tampa Bay Buccaneers (2-2) Sunday.

But if the Falcons want to win their third consecutive game, they will have to do so without versatile running back Cordarrelle Patterson.

Arthur Smith announced Mondaythat Patterson had been placed on injured reserve for at least four games due to a knee injury. The 31-year-old currently leads the team in rushing (340 yards) and has scored three touchdowns on 58 carries (5.9 yards per carry). He's also added four receptions for 28 yards.

"He had a minor procedure this morning that will help long-term," Smith said. "We have a great medical team and we felt like instead of dealing with it week-to-week, this would be the best move going forward."

Patterson and Damien Williams entered the season as Atlanta's top two backs, but both are now on IR.

With Patterson out, the Falcons will look to rookies Tyler Allgeier and Caleb Huntley to fill the void left. Allgeier, a fifth-round pick, had 10 carries for a team-high 84 yards in Atlanta's 23-20 win over Cleveland on Sunday.

Huntley, an undrafted free agent, added 10 rushes for 56 yards and a score in the win over the Browns. He was promoted to the 53-man roster Monday after Patterson was moved to IR.

Smith said he was "absolutely" pleased with his team's depth at running back, also crediting fullback Keith Smith for his work.

Right guard Chris Lindstrom has been a key cog in an offensive line that's paved the way for the NFL's fourth-best rushing attack (168.0 yards per game). Not only has he been a bruiser in the run game, but he only allowed one pressure in 20 pass-block attempts in the win over Cleveland, good for a 97.1 offensive grade from Pro Football Focus.

"There's always work to be done and you try to be objective, but Chris is playing really good football for us," Smith said. "But we've got to keep it up because this a really good run defense we are about to play in Tampa."

Atlanta will look to snap a four-game losing streak to Tampa Bay.

"We've got a heck of a challenge in front of us," Smith said. "Todd Bowles, he's a heck of a football coach."

--Tight end Kyle Pitts has only been targeted once in the red zone this season. He had one reception for 25 yards in the win over Cleveland.

--Cornerback Dee Alford, who signed with Atlanta in January after playing in the Canadian Football League, sealed the Falcons' win over Cleveland when he picked off Browns quarterback Jacoby Brissett with 1:03 remaining in the game. It was his first interception as an NFL player.