VANCOUVER, BC / ACCESSWIRE / September 27, 2022 / Clover Leaf Capital Corp. (TSXV:CLVR.P) ('Clover Leaf' or the 'Company') is pleased to announce that it has entered into a non-binding letter of intent (the 'LOI') dated September 26, 2022 with North Shore Energy Metals Ltd. ('North Shore Energy'), a mineral exploration company which holds two properties located at the eastern margin of the Athabasca basin that are prospective for uranium and other metals.

The LOI outlines the principal terms and conditions of a proposed transaction which if completed will result in a reverse takeover of Clover Leaf by North Shore Energy (the 'Transaction'). The LOI provides that the parties have until November 30, 2022 to enter into a binding agreement for the Transaction, after which date the LOI will be terminated unless otherwise agreed to by the parties. Either party may terminate the LOI prior to November 30, 2022 if among other things it is not satisfied with the results of its due diligence.

North Shore Energy is led by its President and co-founder, Mr. Brooke Clements, a geologist with over 35 years of experience. Mr. Clements is currently the President of Craton Minerals Ltd. and held positions as President of Peregrine Diamonds Ltd. (2007-2015) and Vice President Exploration of Ashton Mining of Canada Inc. (1999-2007). He received the prestigious Association for Mineral Exploration of BC Hugo Dummett Award for diamond exploration and development in 2012 and 2019 in recognition of diamond discoveries in Quebec and Nunavut respectively. 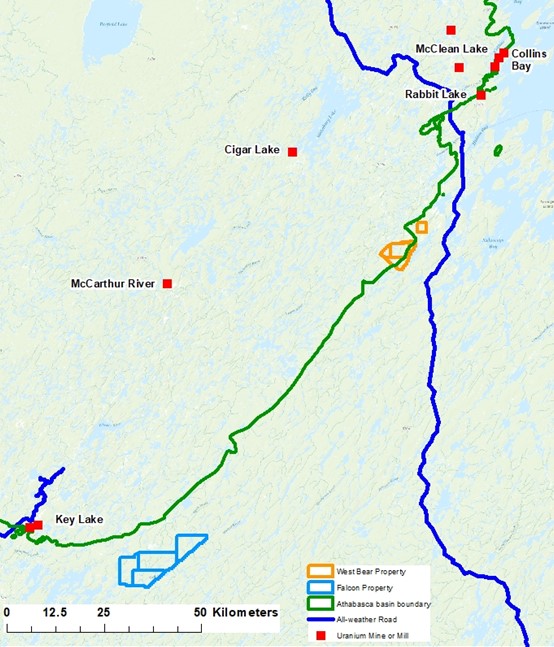 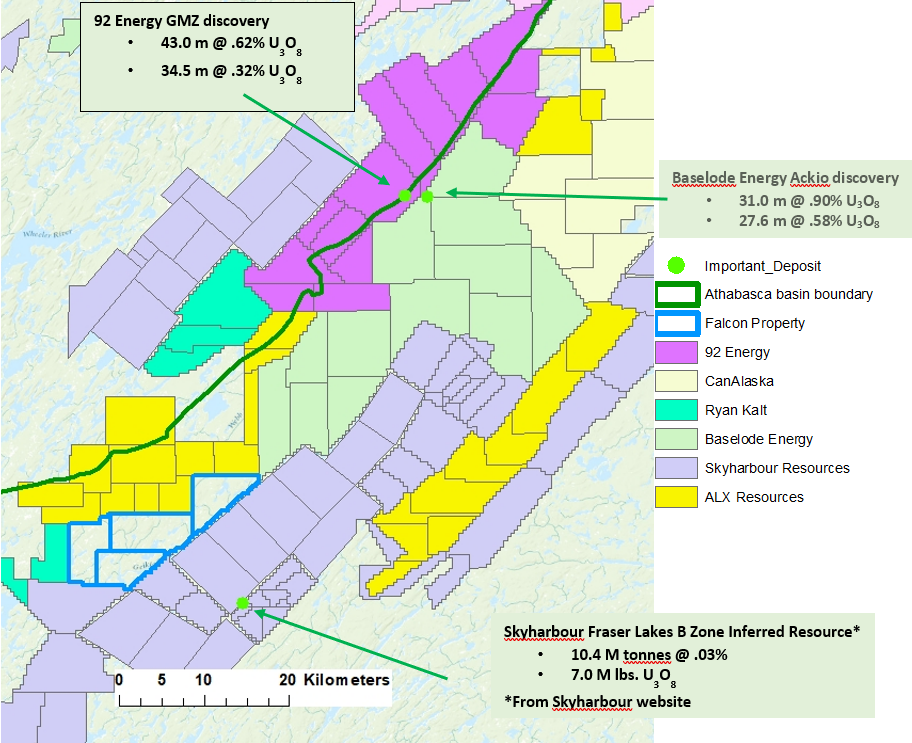 The West Bear property consists of five mineral claims covering 4,511 hectares at the eastern margin of the Athabasca Basin, approximately 35 kilometers southeast of Cameco Corp.'s Cigar Lake uranium mine and 50 kilometers south of the McClean Lake uranium mill, which is majority-owned by Orano Canada. The West Bear uranium and cobalt-nickel deposits held by UEX Corp., which was recently acquired by Uranium Energy Corp., are located just north of the property. Adjacent exploration properties include those held by Denison Mines Corp. and IsoEnergy Ltd. (Figure 3).

North Shore Energy has an option to acquire 75% of the West Bear property from Gem Oil Inc. under the following terms over a three-year period ending on April 11, 2025:

Upon completion of the earn-in, North Shore Energy will have the right to acquire the remaining 25% of the West Bear property for $200,000 cash and the issuance of $200,000 worth of common shares to Gem Oil Inc. Upon completion of the earn-in, Gem Oil Inc. will be granted a 2% royalty, with North Shore Energy having the option to purchase 1% of the royalty for $1,000,000. 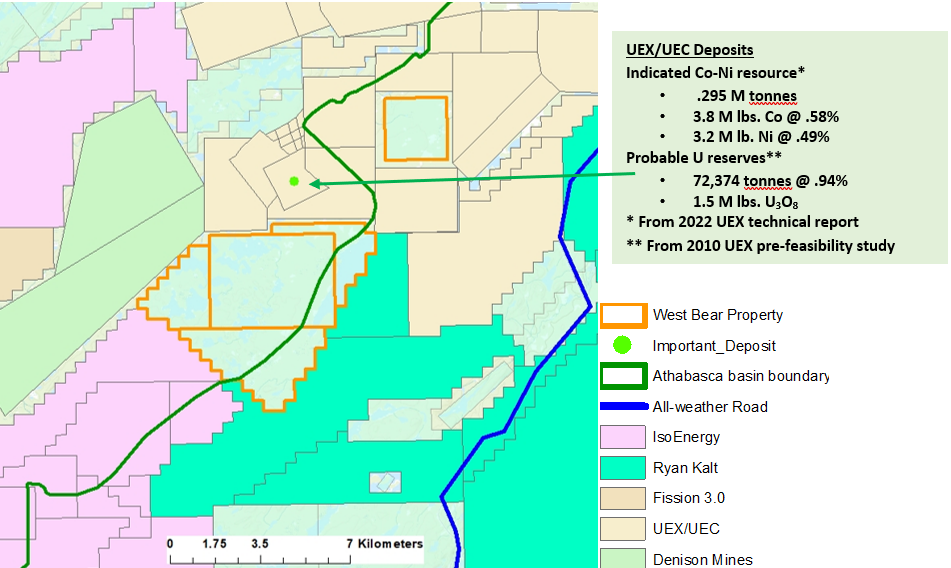 Interpretation of publicly available geological and geophysical data is underway in an effort to identify priority targets for exploration on North Shore Energy's properties. In addition, North Shore Energy is planning to conduct airborne gravity-magnetic-radiometric surveys over both of its properties.

Immediately prior to the completion of the Transaction, North Shore Energy is expected to have 16,725,000 common shares outstanding, with no outstanding warrants, stock options or other convertible securities.

Summary of the Transaction

The Transaction is not a Non-Arm's Length Qualifying Transaction, as defined in TSXV policies, and therefore it is not anticipated that the approval of Clover Leaf's shareholders will be required. Blake Steele and Alexander Molyneux, directors of Clover Leaf, are Insiders (as defined in TSXV policies) of North Shore Energy, as they each hold over 10% of the outstanding common shares of North Shore Energy.

Pursuant to the LOI, it is anticipated that prior to or concurrently with the closing of the Transaction, either Clover Leaf or North Shore Energy shall complete an equity offering of common shares or units, at a price per security to be determined in the context of the market, to raise aggregate gross proceeds of not less than $5,000,000 (the 'Concurrent Equity Offering'). The proceeds will be used to fund exploration programs on the West Bear and Falcon properties, transaction costs and general and administrative expenses.

Finder's fees will be payable on the Concurrent Equity Offering subject to the acceptance of the TSXV.

It is expected that Clover Leaf will effect a name change to a name to be agreed upon between the parties (the 'Name Change') upon the completion of the Transaction.

The Resulting Issuer will carry on as a Tier 2 Issuer on the TSXV as a mineral exploration and development company.

Board of Directors and Management of the Resulting Issuer

The parties anticipate that the binding Definitive Agreement will provide that the obligations of the parties to complete the Transaction will be subject to a number of conditions, including, but not limited to, the following:

In connection with the Transaction and pursuant to the requirements of the TSXV, Clover Leaf will file on SEDAR (www.sedar.com) a filing statement (or an information circular in the event that the Transaction requires approval by the shareholders of Clover Leaf) which will contain details regarding the Transaction, Clover Leaf, North Shore Energy and the Resulting Issuer.

Clover Leaf will issue a further release announcing the status of negotiations of the Definitive Agreement, and upon entering into the Definitive Agreement, will be providing further details in respect of the proposed Transaction in accordance with the policies of the TSXV including information relating to the Transaction structure and descriptions of the proposed directors and Insiders (as such term is defined in the policies of the TSXV).

In addition, a summary of North Shore Energy's financial information will be included in a subsequent news release.

Assuming the parties are successful in negotiating and entering into the Definitive Agreement, completion of the Transaction will be subject to a number of conditions, including but not limited to, Exchange acceptance and if applicable pursuant to Exchange Requirements, majority of the minority shareholder approval. Where applicable, the transaction cannot close until the required shareholder approval is obtained. There can be no assurance that the Transaction will be completed as proposed or at all. Investors are cautioned that, except as disclosed in the management information circular or filing statement to be prepared in connection with the transaction, any information released or received with respect to the transaction may not be accurate or complete and should not be relied upon. Trading in the securities of a capital pool company should be considered highly speculative. The TSX Venture Exchange Inc. has in no way passed upon the merits of the proposed transaction and has neither approved nor disapproved the contents of this press release.

Investors are cautioned that, except as disclosed in the management information circular or filing statement to be prepared in connection with the Transaction, any information release or received with respect to the Transaction may not be accurate or complete and should not be relied upon. Trading in the securities of a capital pool company should be considered highly speculative.

The TSX Venture Exchange Inc. has in no way passed upon the merits of the Transaction and has neither approved nor disapproved the contents of this press release.

This news release does not constitute an offer to sell or the solicitation of an offer to buy any securities in any jurisdiction.

Mr. Brooke Clements, a qualified person as defined by National Instrument 43-101 - Standards of Disclosure for Mineral Projects and President of North Shore Energy, has reviewed and approved the scientific and technical disclosure in this press release.

This news release contains certain forward-looking statements, including statements relating to the Transaction and certain terms and conditions thereof, the ability of the parties to complete the Transaction, the Name Change, the Resulting Issuer's ability to qualify as a Tier 2 Mining issuer, the waiver of TSXV sponsorship requirements or the finding of a sponsor, shareholder, director and regulatory approvals, the structure and completion of the Concurrent Equity Offering, and any other statements that are not historical facts. Wherever possible, words such as 'may', 'will', 'should', 'could', 'expect', 'plan', 'intend', 'anticipate', 'believe', 'estimate', 'predict' or 'potential' or the negative or other variations of these words, or similar words or phrases, have been used to identify these forward-looking statements. These statements reflect management's current beliefs and are based on information currently available to management as at the date hereof.

While the proximity of North Shore Energy's two properties to those owned by other companies with metals discoveries, resources and reserves is noted on maps included in this release, there is no assurance that work on these two properties will yield similar results.