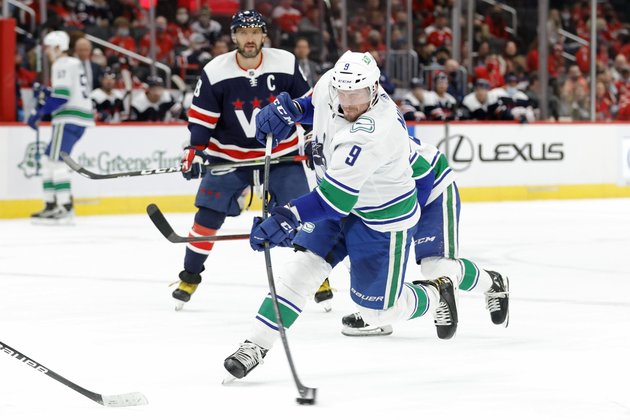 Elias Pettersson scored twice as the Vancouver Canucks snapped a three-game losing streak with a 4-2 victory against the host Washington Capitals on Sunday afternoon.

Bo Horvat and J.T. Miller both had a goal and an assist and Quinn Hughes added two helpers for Vancouver, which improved to 9-3-1 since Bruce Boudreau took over as coach early last month.

Alex Ovechkin and Tom Wilson scored power-play goals for Washington, which has won just once in its past six games (1-3-2). Ilya Samsonov stopped 28 of 31 shots.

Ovechkin gave the Capitals a 1-0 lead at 10:31 of the first period on a one-timer from the top of the left faceoff circle that snuck between Demko's pads and trickled over the goal line. It was Ovechkin's 26th goal of the season, tying him with Edmonton's Leon Draisaitl for the league lead, and the 756th of his career -- 10 shy of matching Jaromir Jagr for third all-time.

The Canucks scored three second-period goals, two with the man advantage, to take the lead.

Pettersson tied it 33 seconds into the second on the power play, banking a wrist shot from the slot off the right post and into the net.

Pettersson made it 2-1 at 4:48 of the period. After Oliver Ekman-Larsson's shot from the blue line was knocked down in front of the net, Pettersson whacked at the puck twice, with both shots stopped by Samsonov at the right post. The puck trickled just wide of the net and Pettersson lifted a backhander from beneath the goal line off the goalie's back and into the net.

Horvat extended the lead on the man advantage at 18:50 of the period, putting a one-timer from the left faceoff circle past a screened Samsonov.

Wilson closed the gap at 6:22 of the third on a one-timer from the right faceoff circle.

Miller capped the scoring on an empty-netter with 58 seconds left.

The Capitals played without forward T.J. Oshie, who suffered an upper-body injury in Saturday's 2-0 victory at the New York Islanders, and defenseman John Carlson, who was placed in the NHL's COVID-19 protocol before the game. Washington activated forward Carl Hagelin and defenseman Dmitry Orlov from the virus list and both played Sunday.

WASHINGTON D.C.: The U.S. State Department has announced the launch of a new program to capture and analyze evidence of ...

Popularity of Indonesian president sinks due to price rises

EAST JAVA, Indonesia: A tourist bus crashed into a billboard on a highway on Indonesia's main island of Java this ...

BELGRADE, Serbia: Belgrade was paralyzed this week by a series of bomb threats, including against schools, bridges, restaurants and a ...

WASHINGTON D.C.: In a tweet this week, Amazon founder Jeff Bezos criticized President Joe Biden for the second time in ...

As food prices rise, Iranians take to the streets to protest

TEHRAN, Iran: According to social media posts, protests that began last week across Iran over a reduction in state subsidies ...

Face masks return for workers at some Michigan auto factories

SYDNEY, NSW, Australia - Stocks in Asia mostly sank on Thursday, following on from a rout on Wall Street overnight."There ...

LONDON, England: Israeli startup REE Automotive has announced that it will build an assembly plant for electric vehicles (EVs) in ...