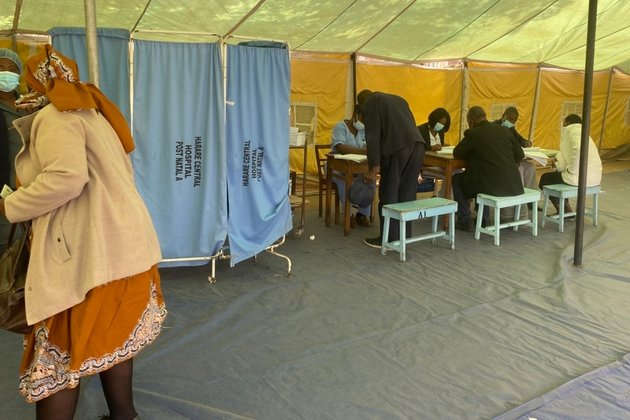 HARARE, ZIMBABWE - Zimbabwe's government, which has confirmed the presence of the omicron variant of COVID-19 in the country, has ruled out easing its new tough restrictions on visitors and returning citizens as it tries to contain the new variant.

The country's Vice President Constantino Chiwenga - who is also the country's health minister - said in a message broadcast on national television Thursday night that Zimbabwe had a confirmed case of the omicron variant and was conducting genomic sequencing.

"We have already known that we now have it [the Omicron variant] in this country. Therefore, we must remain vigilant. So we want everyone to be safe. So let's be vaccinated, let's follow the protocols. We do not want to put extra measures, but if you follow these measures, I think everyone of us will be safe and together will conquer this invisible enemy," Chiwenga said.

Earlier this week Zimbabwe announced a nine-hour curfew and compulsory 14-day quarantine for anyone arriving in the country, to prevent the spread of the omicron variant.

She says that given the number of Zimbabweans in the diaspora, if they were to be quarantined in hotels or other centers, they would be crowded and some would contract COVID-19 there. If someone has a negative COVID-19 test, she says, they should be asked to quarantine at home.

"What is the purpose of returning for festive seasons? You are returning for Christmas, aren't you? There is nothing that stops you until this avalanche is gone and come home. We are not forcing people to come home, you are choosing to come home at this critical time," Mangwana noted.

Zimbabwe became the first country in southern Africa to enact such restrictions since the emergence of the omicron variant, which spreads more easily.

Dr. Cleophas Chimbetete, president of Zimbabwe College of Public Health Physicians, says "the omicron variant has been confirmed in our nation, there is absolutely no need for us to panic. We can overcome COVID-19, we can even overcome the new variant. Please let's vaccinate those that are still considering vaccination. The advice from Zimbabwe College of Public Health Physicians, the advice from your medical fraternity is vaccines are safe and vaccines save life. Let's maintain the usual public health measures that we have been speaking and speaking about repeatedly."

Zimbabwe has fully inoculated just above 2.8 million people since February, when it began its vaccination program, with a target of vaccinating at least 10 million people by the end of the year, a figure which some say might be difficult to reach given the scarcity of resources and short time left.

Thursday, the WHO Africa Regional Office said the detection of the omicron variant is coinciding with a 54% surge in COVID-19 infections in Africa, mainly due to an uptick in southern Africa.