Click here for a video summary of this press release.

TORONTO, ON / ACCESSWIRE / December 2, 2021 / E2Gold Inc. (TSXV:ETU) (the 'Company' or 'E2Gold') is pleased to announce that the target McKinnon Zone has been intersected in the majority of drill holes, up to 350m below the Current Resource. Separately, COVID-related supply disturbances have resulted in severe delays in receipt of assays, such that the Company is waiting for assays for 760 drill samples. E2Gold's team is adjusting its activites to accommodate the delays, and are using other available means to carry out its exploration activities.

Dr. Natalie Pietrzak-Renaud, E2Gold's VP of Exploration, stated, 'While we wait for our assays, our geologic tools confirm that we are intersecting the McKinnon Zone at depth. Visually we have been able to identify the target in 6 of the 8 deep holes completed to-date. This is a promising development in our assessment of the McKinnon Zone footprint.'

Dr. Eric Owens, President and CEO, added: 'In spite of the assay delays, our current drill targets are largely independent of one another.' Dr. Owens continued, 'Importantly, we continue to operate on multiple levels beyond our current drilling program in our efforts to identify future drill targets and we anticipate a robust 2022 exploration program.'

The current program is aimed at identifying the potential footprint of the at-surface McKinnon Zone, which hosts an Inferred Mineral Resource, compliant with National Instrument 43-101, consisting of 6.2 Mt grading 1.65 g/t gold, for 328,800 ounces of gold (the 'Current Resource').(1) The resource lies above 150 m depth, and is currently open below that depth and along trend.

In an attempt to mitigate the effects of the assay delays, E2Gold is temporarily operating with one drill rig which will also cease drilling during the upcoming holidays. Further, the Company has taken measures to try to secure more rapid return of assay results, including shipment to a second assay laboratory. E2Gold's team has also reviewed and adjusted its sample shipment protocols, and continues to review other laboratory options.

Figure 1: E2Gold Geologists use blacklight to target the McKinnon Zone 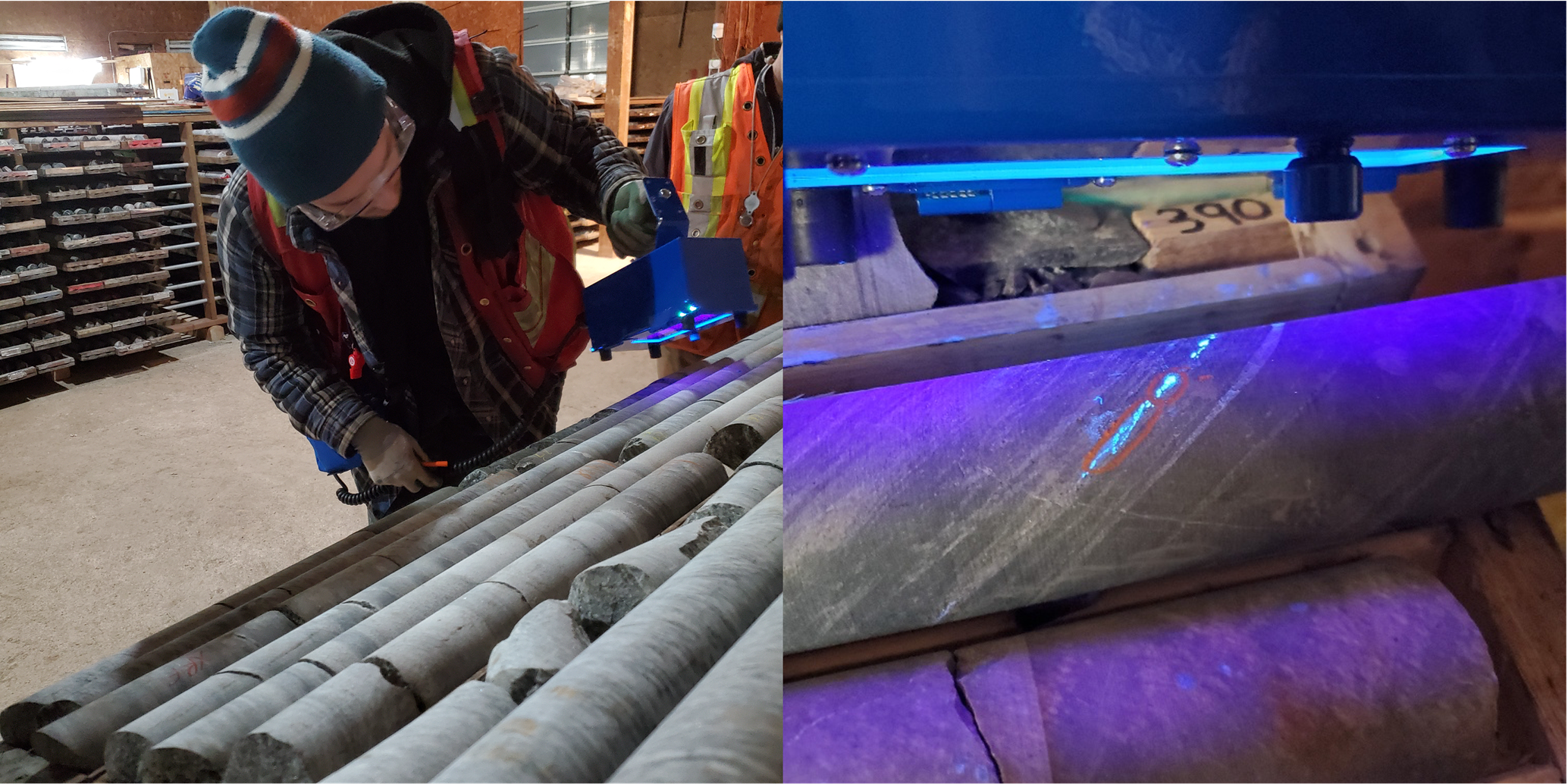 E2Gold has completed 7,500 m of our 10,000 m drilling program, in 16 holes to-date. The Company's first step-out drill program is testing 3 targets, independent of one another. These include 1) a series of deep holes well below the known McKinnon Zone Inferred Resource, 2) shallow-level step-out holes aiming to chase higher grade zones within the Inferred Resource, and 3) off-trend geophysical targets.

E2Gold's principal efforts are the deep target holes below the McKinnon Zone: 12 holes spaced roughly 300 m apart designed to test the zone at approximately a 500 m depth, some 350 m below the Current Resource. Geological indicators from the deep holes, such as the presence of quartz veining, indicator minerals, and structural fabrics confirm the intersection of the Mckinnon Zone at depths between 300 m and 500 m, well below the limits of the known Current Resource.

The other two targets - shallow step-out and off-trend targets - comprise a smaller part of the program. These are part of a broader planned program to test targets beyond the McKinnon Zone - along trend or off trend - on the largely untested 75-km long Hawkins project, a program that will carry in to 2022 and beyond. Current drilling will continue into the new year in order to take advantage of winter freeze-up.

While the Company waits on its McKinnon Zone assays results, its exploration team has been busy identifying new drill targets on and beyond the McKinnon Zone. To that end, E2Gold has been employing a number of different exploration methods, including airborne magnetic surveys, ground induced polarization ('IP') surveys, mineral and rock chemical studies, surface stripping, channel sampling, downhole geophysical and tele-optical surveys, surface mapping and prospecting, and 3D modelling.

Western Claim Block: E2Gold completed a 2,941 line-km airborne magnetic survey over its Western Block of claims in the fall, and was subject to first-pass geological and prospecting surveys during 2021. The western block is essentially an untested part of the property, but the underlying geology consists of the confluence of two major fault zones in the shadow of the Strickland Pluton, and suggests a favorable environment for gold mineralization.

Eastern Claims: The underexplored eastern claim block, recently enlarged through staking, will be subject to prospecting, mapping and possible geophysical surveys. Focus will be on and around known Mckinnon-style geological targets and/or geophysical anomalies.

E2Gold Inc. is a Canadian gold exploration company with a focus on Its large flagship property, the Hawkins Gold Project, covers seven townships in north-central Ontario, about 140 km east of the Hemlo Gold Mine. The Company is currently drilling the second half of a 10,000 metre drill program to confirm and expand the McKinnon Inferred Resource. E2Gold is commited to increasing shareholder value through the development of all targets at Hawkins and future potential of the Band-Ore property.

Forward Looking Statements - Certain information set forth in this news release may contain forward-looking statements that involve substantial known and unknown risks and uncertainties, including the risk that the Offering may not be completed on the terms currently proposed or at all. These forward-looking statements are subject to numerous risks and uncertainties, certain of which are beyond the control of E2Gold, including with respect to the potential size and composition of the Offering and the receipt of all regulatory approvals. Readers are cautioned that the assumptions used in the preparation of such information, although considered reasonable at the time of preparation, may prove to be imprecise and, as such, undue reliance should not be placed on forward-looking statements.

President Biden and the Democrats were highly critical of President Trump's foreign policy, so it was reasonable to expect that ...

AL-ULA, Saudi Arabia: Shedding light on the lives of the ancient inhabitants of Arabia, archaeologists from the University of Western ...

DUBLIN, Ireland - A father and mother who sexually molested their children and permitted them to be raped and abused ...

Number of births in China lowest ever

BEIJING, China: On Monday, statistics showed Mainland China's birth rate has dropped to a record low of 7.52 births per ...

5G cellular could be 'catastrophic' in aviation: US airline officials

CHICAGO, Illinois: According to U.S. airline officials, the introduction of a new 5G service could cause U.S. air traffic to ...

LONDON, England: The British Broadcasting Corporation (BBC) faces a major financial setback following a recent announcement by the government to ...

DUBAI, UAE: Auction house Sotheby's Dubai will sell a black 555.55-carat diamond believed to be from outer space, known as ...

At $534 million, Rome's Villa Aurora highest price ever at auction

ROME, Italy: Villa Aurora, a villa for sale in Rome with a starting price of $534 million, was expected to ...

Buyers warm to Asian stocks, major indices advance across the board

SYDNEY, NSW, Australia - Stocks in Asia were on the boil on Thursday with the major indices across the region ...

LISTIKOT, Nepal Traders importing goods from China complain about the delayed shipments by Chinese authorities. The shipments supposed to reach ...

Tesla looks to Mozambique to replace China for minerals

AUSTIN, TEXAS: In a first-of-its-kind deal aimed at reducing its dependence on China for graphite, Tesla is turning to Mozambique ...

Beasts of No Nation