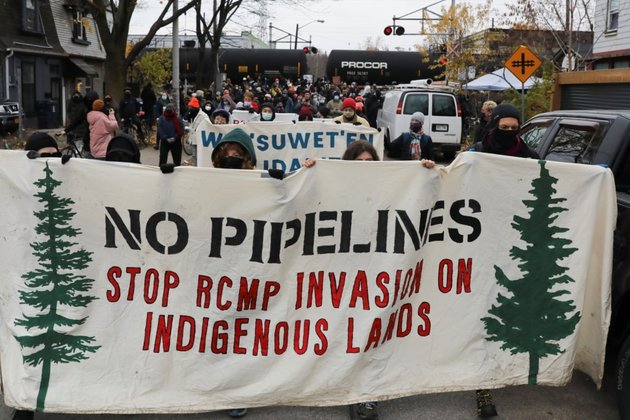 PRINCE GEORGE, BRITISH COLUMBIA - A photojournalist and a documentary filmmaker have been released by a Canadian judge, three days after being arrested while covering police enforcement of an injunction against pipeline protests in northern British Columbia.

Amber Bracken, who had been on assignment for B.C.-based outlet The Narwhal, and documentarian Michael Toledano were released on the condition that they appear in court in February.

'My arrest and incarceration were punitive and a blatant attempt to repress images of police violence against Indigenous people in Canada,' Toledano tweeted.

'I have no doubt that my arrest was targeted. One officer who I encountered many times on Wet'suwet'en territory gloated about the arrest.'

The Royal Canadian Mounted Police said in a statement that two people who 'later identified themselves as independent journalists' were arrested after refusing to leave 'building-like structures' near a drilling site for the natural gas pipeline, which is under construction.

The arrests came after members of the Gidimt'en clan, one of five in the Wet'suwet'en Nation, set up blockades along a forest service road Nov. 14.

Police said the road was cleared on Thursday.

Opposition among Wet'suwet'en hereditary chiefs to the 670-kilometer (416 mile) pipeline sparked rallies and rail blockades across Canada early last year, while the elected council of the Wet'suwet'en First Nation and others nearby have agreed to the project.

A memorandum of understanding had been signed between the hereditary chiefs and the federal and provincial governments, easing tensions up until now.

The pipeline would transport natural gas from Dawson Creek in northeastern British Columbia to Kitimat, British Columbia It is more than halfway finished with almost all the route cleared and 200 kilometers (121 miles) of pipeline installed, Coastal GasLink has said.

The Canadian Association of Journalists condemned the arrests of Bracken and Toledano. In an open letter signed by several dozen news outlets and press freedom organizations, it called on Federal Public Safety Minister Marco Mendicino to 'bring about a swift resolution respecting journalists' fundamental rights.'

Asked about the arrests by reporters in Ottawa, Mendicino said it was not for him or the government to adjudicate the case or to direct police operations on the ground, but it's important that journalists can do their jobs without interference.

British Columbia Public Safety Minister Mike Farnworth said a free press is critical to democracy and he hoped the situation would not escalate.

Does Pentagon need three-quarters-of-a-trillion-dollars every year?

Despite a disagreement over some amendments in the Senate, the United States Congress is poised to pass a $778 billion ...

BERLIN, Germany: In a bid to halt the spread of the fourth wave of COVID-19 in Germany, national and regional ...

NEW YORK CITY, New York: A former Netflix software engineer and his friend will serve time in prison after being ...

VIENNA, Austria: A surgeon who amputated the wrong leg of an 82-year-old patient in May, later describing the mistake as ...

MUNICH, Germany: German authorities announced this week that a World War II bomb exploded at a construction site next to ...

LONDON, England: The United States, United Kingdom, European Union, and Canada have agreed to tackle the ongoing migrant crisis on ...

New chairman of Disney Company is board member Susan Arnold

BURBANK, California: The Walt Disney Co. has announced that Susan Arnold will become the new board chairman, replacing long-time chairman ...

U.S. stocks roar back as concerns over Covid variant diminish

Grab app valued at $40 billion in debut on Nasdaq

SINGAPORE: Singapore-based Grab, the major ride sharing app used in South East Asia, has made its stock market debut on ...

After decades of delays, Shell Oil gives up on UK's Cambo oilfield

LONDON, England: Shell Oil announced this week that it has abandoned its plans to develop the Cambo oil field west ...

SYDNEY, NSW, Australia - Stocks in Asia closed modestly lower Monday as markets appeared to be coming to grips with ...

US saw only 210,000 hired in November, falls short of expectations

WASHINGTON D.C.: In a reversal of the predictions of expected job growth issued by economists, U.S. employers hired only 210,000 ...

The Man Who Fell to Earth

Man Who Fell to Earth