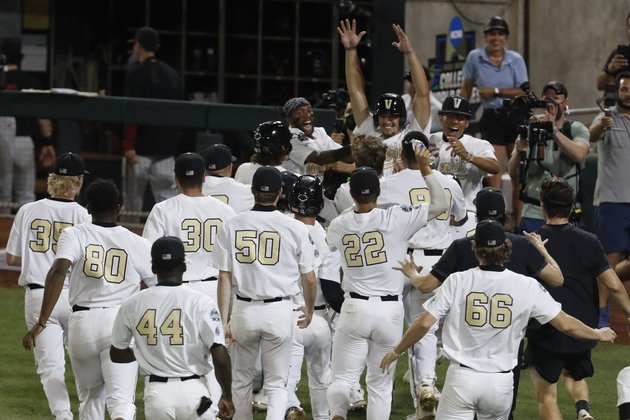 Spencer Jones scored on a wild pitch with two outs in the bottom of the ninth inning as No. 4 Vanderbilt stunned No. 9 Stanford 6-5 Wednesday night in a College World Series elimination game at Omaha, Neb.

With his team up 5-4, Cardinal pitcher Brendan Beck secured the first two outs of the final frame before Commodores outfielder Javier Vaz worked a walk. Jones came on as a pinch hitter and advanced Vaz to third on an infield single that Stanford shortstop Adam Crampton mishandled.

Enrique Bradfield Jr.'s first-pitch RBI single knotted the score and moved Jones up to third, where he came around to score on Beck's wild offering two pitches later.

With the win, the Commodores move on to play NC State on Friday afternoon.

Dominic Keegan had two hits, including a two-run home run, for Vanderbilt against Stanford. Tate Kolwyck and Parker Noland added RBI singles in the sixth inning to help the Commodores escape a 5-2 hole.

Brock Jones slugged a solo homer among three hits and three RBIs for the Cardinal.

Stanford starter Quinn Mathews was tagged for four runs on five hits and a walk over 5 1/3 innings. He struck out five. Vanderbilt's Christian Little surrendered four runs (one earned) on four hits and two walks over three innings, punching out three.