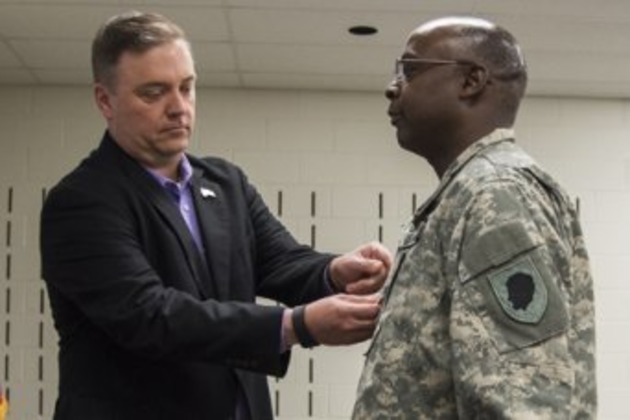 'I feel it's my duty to help anyone I can,' said Johnson, commander of Illinois Army National Guard's 244th Digital Liaison Detachment in Chicago. 'Duty is the Army value that really stands out to me. Duty to my family, Soldier and the Army, duty to my state, nation, and duty to humanity.'

'Col. Johnson is a leader who truly cares about his Soldiers and their well-being,' said Sgt. 1st Class Charles Chinski, 244th Digital Liaison Detachment sergeant. 'He mentors and trains his officers and allows the senior [noncommissioned] officers to mentor the enlisted Soldiers in the unit.'

As a civilian clinical psychologist with the Department of Veterans Affairs at the Naval Station Great Lakes' Recruit Evaluation Unit, Johnson ensures Navy recruits are mentally fit for military duty. He also examines sailors who are slated for duty in special operations as well as submariner and aircrew to ensure they are mentally suitable for such rigorous duty. Johnson provides support to recruits, he said, to build their resilience so they can complete basic training.

Johnson has served in the Illinois Army National Guard for 27 years and has more than 20 years of experience in the mental health field.

In his free time, he volunteers as a mentor to middle and high school students within Chicago's south suburban communities through the Leaders for Tomorrow Program, which is operated by his Theta Mu Lambda Chapter of Alpha Phi Alpha Fraternity. Additionally, he serves as the scholarship chairman for the chapter's foundation that awards financial scholarships to area young people who wish to pursue a college education.

Johnson also volunteers twice a month at Hilda's Place, a community shelter, where he helps poor and homeless people. There, he serves as a member of a crew, preparing and serving meals and cleaning the kitchen and dining areas. He also provides mentoring and other supportive services to the shelter's residents.

Johnson entered military service in 1989. As a Simultaneous Membership Participant, he drilled with an Illinois National Guard unit while at the same time pursuing his undergraduate degree and commission through the ROTC.

He enrolled in the SMP program following the advice of an ROTC noncommissioned instructor who learned that he wanted to be an infantry officer. The instructor told Johnson that, as an SMP cadet, he would have additional opportunities to become the infantryman and officer that he aspired to be.

Johnson received his commission in 1992 and subsequently completed his infantry training at Fort Benning, Georgia.

Johnson attended Chicago State University, earning a bachelor's degree in sociology in 1992, a master's in counseling in 1996 from Governors State University, and later a doctorate of psychology and clinical psychology from the Illinois School of Professional Psychology in 2004. He earned a master's degree of strategic studies at the Army War College in 2014 as a member of the resident class of 2014.

'The 8th Illinois Infantry represents not just the history of African-Americans within the Illinois National Guard who served gallantly in the U.S. military during one of the most pivotal times in recent history,' Johnson said, 'it represents African-American contributions to our country and the world. The 8th Illinois Infantry and other African American units that served in Europe introduced American jazz to their French counterparts. The 8th had the best jazz band of all.'

Johnson said the Army has made tremendous progress in the treatment of African-American Soldiers.

'The social experiment of integrating the services was successful, but work continues in the areas of professional development and assignments and promotions,' Johnson said. 'These successes have also been transferred to our society at large. I believe there's still more work to do, but our military and society are well on its way to allow all to serve fully and reach the highest positions within our organizations.'

For anyone considering joining the Army, Johnson advises them 'to do your research to ensure that it really is the life that you want. Trainers, leaders, and peers will expect you to live up to your decision to enlist or seek a commission.'

He considers the people he serves with to be exceptional Soldiers and leaders.

'I especially thank those whom I served with early in my career and on an embedded training team in Afghanistan. I owe much of my accomplishments to them,' Johnson said. 'Our Soldiers and junior leaders are the reason that our Army is the best in the world.'

A resident of Evanston, Illinois, Johnson was raised on the southside of Chicago in a neighborhood where residents faced challenges like drugs and gang activity.

'I was never interested in participating in gangs or had a desire to use drugs growing up,' Johnson said. 'I was too involved in Army JROTC in high school and community activities and my parents would have killed me,' Johnson said.

'I'm living the dream that started while playing Army with my toys as a child and serving in my high school's Army JROTC Program,' he added.

'I owe so much to the Army and to the Illinois National Guard.'